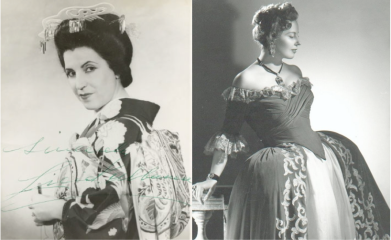 Two very great Italian sopranos – Licia Albanese, and Magda Olivero – died within the last few weeks. In the wake of several recent, very unexpected celebrity deaths, it won’t be surprising if you didn’t hear the news.   The two weren’t superstars to the world at large (perhaps not even to the opera world, at least not in recent decades). And no one could describe this as untimely – Albanese was probably 105 (there’s some disagreement about her birth date); Olivero was 104.

Still, I want to take a moment to celebrate their lives and artistry, which over the years meant a lot to me. In both cases, I didn’t warm to them immediately – neither had a conventionally beautiful voice, nor did they specialize in the repertoire I loved most at the time (Mozart, Strauss, and Bel Canto.)

But when I finally found my way to them, it was a revelation. Both Albanese and Olivero made a specialty of the Verismo school – Puccini, certainly, but also (for Olivero, especially) Mascagni, Cilea, et al. To these operas – in some ways, the equivalent of Naturalism in the theater – they brought unparalleled commitment, dramatic honesty, and a vivid sense of storytelling. The older generation of opera lovers I knew would sometimes tear up describing Licia’s Butterfly, or Magda’s Tosca.

Though I didn’t have the privilege of seeing either sing in person, their recorded performances have such a sense of life that I feel almost as if I did. Both had a special quality, simultaneously fragile yet vibrant (the Italian’s call it “morbidezza”) that really registers.

Here are a couple of sample moments. Albanese’s is from the final scene of Puccini’s Manon Lescaut, in a live performance from the Met.   When I try to get students to understand Verismo style, it’s often the example I pick – the emotional world is captured so stunningly:

For Olivero, here is Tosca’s “Vissi d’arte” – and again, a supreme sense of line, presence and authority: