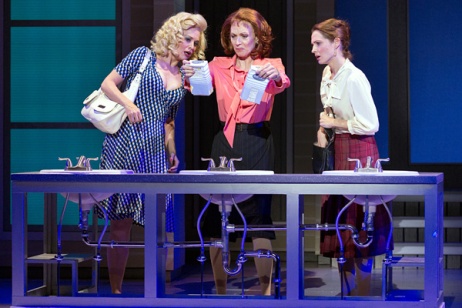 Amy Bodnar, Dee Hoty and Amanda Rose in 9 TO 5 at the Walnut Street Theatre. (Photo by Mark Garvin.)

It’s clever of the Walnut Street Theatre folks to program 9 to 5 on the heels of last season’s How to Succeed in Business. The two big musicals are bookends for corporate America – How to Succeed seen through the glinty eyes of male executives, 9 to 5 from the glummer perspective of women whose thankless task it is to support them.

But the comparison shines a merciless light on 9 to 5. We could hardly expect it to equal How to Succeed, a Pulitzer Prize winner of exceptional brilliance and satiric point, in the top-tier of American musicals. Still, I hoped.

As it turns out, 9 to 5 is handsomely packaged and well performed. Some of it is good fun (Mary Martello’s solo number is worth the price of admission.) Some of it is cartoonish. Almost all of it feels like a product, shiny and manufactured. It’s also heavily branded – creator Dolly Parton herself appears via video to frame the show.

I’m not sure the source material promised more. If you missed the 1980 movie on which this show is based – frankly, you didn’t miss much. Part revenge comedy, part soft-edged empowerment fantasy, its best asset, as here, is Dolly. She’s delightful playing Doralee, a busty (well, duh) secretary who conspires with two female pals to shame their asshole boss. (By contrast, co-stars Lily Tomlin and especially Jane Fonda make little impression.) And the title song, written and performed by Parton, is a toe-tapping, rip-roaring hit.

That song is heard here, too, as the show’s opening number, and it remains a winner. The rest of the score, also by Parton, doesn’t rise to the same level – though it’s never less than peppy and tuneful, it’s rarely more than that. And the plot, limited in the movie, is even more bare-bones here.

There is a fair amount to enjoy at the Walnut – the fine voices of the three female leads, Dee Hoty, Amanda Rose and Amy Bodnar; also the comic bravado of Martello, Ben Dibble and Paul Schoeffler. The opening night audience was clearly having a ball. Will they remember any of it tomorrow? I wonder.

In the end, after the requisite power ballads (two of them) are sung, it’s Video Dolly who sends us home, singing a few bars of 9 to 5. It’s not much, but it’s enough – what she has in abundance is star quality, unique and authentic. It’s what 9 to 5 the musical, for all its energy and polish, never delivers.