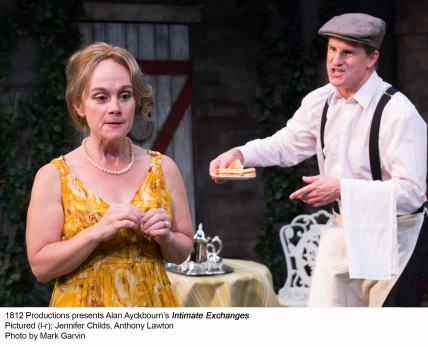 For nearly two decades, 1812 Productions, founded in Philadelphia by several of our most gifted actors, has been devoted to comedy of many genres. Sometimes, these are plays; other times, the group works on material closer to sketch comedy (including improvisation, audience participation, etc.).

There’s a lot to be said for both forms – and the flexibility to move between them – but they can also make strange bedfellows. I’ve unconditionally loved 1812’s vaudeville and political humor shows, which hit a bullseye almost every time. But I haven’t always felt they’ve scored as successfully with their play productions, which sometimes emphasize surface comic brio over deeper dramatic values.

So I’m delighted to wholeheartedly recommend Intimate Exchanges – it’s not only 1812’s richest work yet on a scripted play, but also an evening which benefits from every aspect of the troupe’s comic virtuosity.

To understand why this show is such a triumph, you first need to know how difficult it is to bring off. The appeal of British playwright Alan Ayckbourn’s script is obvious – bold, interesting characters; the need for adroit physical comedy; and an astonishingly clever plot device – a series of different options – which really turns Intimate Exchanges from one play into many more.

But, oh my God – it’s tricky. First, Ayckbourn isn’t just British – he’s BRITISH. Accents, regionalisms, class affiliations, references points and other details are deeply, critically rooted in English culture. The layout of this play (and many of his others – I sometimes think of Ayckbourn as a structural engineer as much as a playwright) is intricate. And maybe hardest of all, while Intimate Exchanges is a comedy, it shares with many other Ayckbourn plays that there are serious issues – including elements of cruelty, rage and sadness – underscoring much of it.

At 1812, director Mary Carpenter and two treasured Philadelphia actors – Jennifer Childs and Anthony Lawton – nail almost all of it. To start, they’ve come up with what to my knowledge is a first in presenting Intimate Exchanges – the audience gets to decide which paths the plot will take during the course of the show. (Ayckbourn’s plan was to present the variations in rep, with the different versions decided in advance.) Frankly, I was skeptical – wouldn’t this interrupt the story, essentially turning the show into sketch comedy?

It works superbly, allowing the audience to be in on the joke, while still retaining the necessary dramatic contours. (On opening night, the Intimate Exchanges I saw was a piercingly funny but bittersweet story of a sedate couple. Their marriage is foundering, and the wife displays growing interest in a chap who has come to work on their garden. Some of these elements will be in all versions of the play, but others may be different.)

Of course, this puts incredible pressure on Childs and Lawton, but – seasoned pros that they are – it looks effortless, and it’s all part of the fun. They each play several characters (not all will be in every performance, since it depends on which plots are followed), and I’d say they handle the accents and mannerisms as well as any American actors I’ve seen in Ayckbourn (and several well-known British ones).

If there’s an area that could still be more fully realized, predictably it’s the darker subtext, though there are many moments already when Childs and Lawton find something touchingly real underneath the virtuosity. I have no doubt more will come as they live in these roles over time. And perhaps other audiences will help, too – on opening night, an industry crowd who were clearly dazzled by the actors (as well they should have been) heartily rewarded the humor, and perhaps missed a bit of the pain.

But the enthusiasm is richly deserved – 1812 has never been better, and our season is off to smashing start.