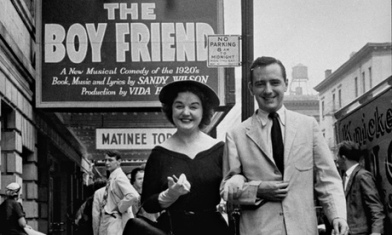 The death of English composer/lyricist/librettist/anecdotalist Sandy Wilson last week wasn’t widely publicized – not even in the British press, although there’s an excellent obituary in The Guardian. (I’m grateful to my friend Holland MacFallister, whose Facebook post is where I saw the news.)  It’s understandable – Wilson died quietly at 90, and his most famous and successful works (The Boy Friend, especially) were more than 50 years in the past.

But I love the handful of his shows I came to know. It took me a while to find out about them and him – as a kid I was already immersed in musicals, but mostly the celebrated American ones. It’s hard to remember this now in our post-Andrew Lloyd Webber world, but British import musicals on Broadway were fairly rare – and successes even rarer.

The Boy Friend was one of those rare exceptions, but to listen to several of the cast albums reveals some of what’s lost in translation. I have three recordings of the show – the 1954 first British recording; the New York production (Julie Andrew’s Broadway debut!) also from 1954; and a 1970 Broadway revival.

In the original British one (not complete, unfortunately), the orchestra is tiny (a piano dominates) and the performances sweet and small-scale. Delicate charm is the dominant mood.By the time The Boy Friend arrived in America, it was altogether more cranked-up.  On the 1954 Broadway album, the voices are better (certainly so in Andrews case – still a teenager, her special qualities are already fully engaged) and the orchestrations fuller and more polished, but an element of parody (replacing something gentler) has crept in. In his memoir (see below), Wilson writes bluntly of his disappointment with aspects of the production. I’m guessing he would find little to like in the 1970 recording, which is pitched at an almost variety-show level of frantic energy. (I don’t have to guess what he felt about Ken Russell’s bizarre, overproduced though highly watchable film, which takes massive liberties – Wilson made no bones about hating it.) 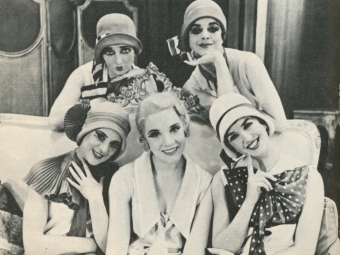 I think the truth is Wilson’s material doesn’t import well. My favorite score of his – Valmouth, a wild extravaganza (based on a Ronald Firbank novel) about oversexed, elderly ladies living in an English seaside resort – failed completely in New York. (You won’t even find it listed in IOBDB, though it did play for 14 performances in 1960.)  But a pair of exceptionally good cast albums confirm the marvels of the score, and preserve two sensational performances in the leading role of Mrs. Yajñavalkya, an exotic Black masseuse – Cleo Laine and Bertice Reading. (Happily, both recordings remain in print. On balance, I prefer the earlier one with Laine; though Reading’s astonishing turn in the revival is practically three-dimensional, even on record.) Valmouth remains the single musical I haven’t seen that I would most like to, though I doubt I’ll ever have the chance.

Wilson himself recognized his work was perhaps fatally linked to another time… and what really is another England. (He would later say of The Boy Friend that while it provided him permanent financial stability, it also made the rest of his career one long denouement.)

But he left us other wonderful souvenirs. Wilson’s memoir, I Could Be Happy with You, long out-of-print but findable through Amazon sellers, is delightful – filled with great (sometimes dishy) stories, opinionated, exquisitely written – one of the best of its kind.

Every bit as good (but harder to find) is a CD recording of a late career (1980-ish) one-man show recorded at The Players in London –the same theatre where The Boyfriend had its premiere. Wilson is neither a great pianist nor a great singer, but it doesn’t matter – he’s a charmer extraordinaire, and it’s an opportunity to savor some rare material from his less successful shows. I especially like “Take Me Home to Cleves” from an unproduced musical about Henry VIII. (The role of Anne was written for Rachel Roberts, no less!) 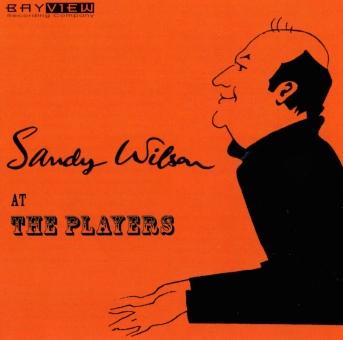 Farewell, Sandy Wilson – I will certainly think of you the next time I’m in London, where every year I see comforting signs of a graceful life that hasn’t completely vanished, alongside changes (the grotesquely “renovated” Savoy Hotel) that confirm nothing wonderful lasts forever.