My colleagues in Penn’s Theatre Arts program and I spend a lot of time talking about potential directing projects. Sometimes they’re pipe dreams – plays we’d love to do that are, in any practical sense, out of reach. More often, though, we’re looking for real possibilities that not only suit our interests as directors, but will also work for our students (as in so many college theatre programs, for us that means more females than males).

Recently, I talked with a friend and colleague who is looking for a project to direct, and I came up with a wildcard suggestion – Maxwell Anderson’s The Bad Seed, which, among other things, has four, even five, sensational women’s roles (well, one is really a girl). My friend smiled. “The Bad Seed – that’s really more your area, I think.”

I understood exactly what she meant. I’ve frequently taught gay theatre, and in particular, theatre focused on a camp aesthetic. The Bad Seed – especially in its 1956 film adaptation – is a legendary camp artifact. I’ve certainly enjoyed the movie many times for just that reason.

But in fact, my interest in directing the play would be very different. I would want to see if it’s possible to do it in a way that would be taken seriously.

A few years ago, I read William March’s original novel, on which Anderson’s play is based. It really took my breath away – and there’s nothing campy about it. March’s Bad Seed is a beautifully written, profoundly destabilizing meditation on postwar America. It made me understand the play in a new way. The Bad Seed isn’t just a thriller about Rhoda Penmark, a soulless, murderous child. It’s an indictment of how much our vision of suburban bliss is self-serving fantasy. 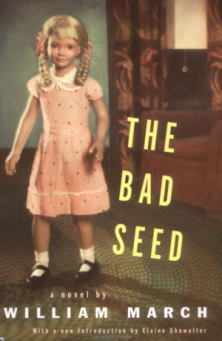 Little Rhoda, brought up in a stable, comfortable home, is a killer. So, it seems, was her maternal grandmother – but it skipped a generation.  Rhoda’s own mother, Christine, is a charming, well-heeled woman with impeccable manners and a deep, if naïve, sense of propriety. Rhoda is loved by parents and doting friends and relatives.  And the result of all this positive attention is… nothing.  Rhoda’s basic character is unchanged and unchangeable. Nature or nurture? The Bad Seed tells us you can’t rely on either as a predictor. It’s all just a crapshoot.

It’s also a work that ruthlessly undermines a sense of class superiority. The affluent, well-brought-up child turns out to be a criminal. Her victim, Claude Daigle, also a child, is the son of blue-collar parents. Through their hard work and sacrifices, he’s able to attend the same private school as Rhoda, where the Daigle family is treated with condescension disguised as compassion. (The inability of the Fern School to protect Claude is a concrete example of a central theme throughout The Bad Seed – the failure of seemingly reliable institutions to provide safe harbor.)

Much, though not all, of this is present also in the play and film, but it’s more problematic. Anderson’s adaptation makes the novel fit tidily into a two-act play – it’s ingenious but contrived, and some of his language, simultaneously earnest and pretentious, hits a wrong note.

Then there’s Mervyn LeRoy’s famous film. Unusually for the time, he stuck very closely to the script and Broadway staging (apart from being required by censors to add a ludicrous, tension-killing finale), and even retained five of the actors who created their roles on stage – including, most significantly, Nancy Kelly (Christine) and Patty McCormack (Rhoda). These are exceptionally detailed performances, crafted for the theater – brilliant in their way, but also a size too large for the movie camera, which exaggerates them into something easy to mimic and dismiss.

But it isn’t that simple. Take one of the iconic camp moments in the movie. Mrs. Daigle, trying to find out how her son died, and suspicious of Rhoda, comes to visit Christine – who, ever the gracious hostess, wheels out a fancy teacart, set up with bar paraphernalia (Mrs. Daigle is an alcoholic).

Yes, there’s an element of unintentional humor, and I’ve seen audiences laugh themselves silly at this moment. (Hell, I’ve been part of those audiences.) But it’s also heartbreaking – Christine’s background is so cloistered and artificial that she has no idea how to handle this situation. And really – would anyone? What do you do when the mother of child who was killed by your child comes to visit?

Could I, as a director, make an audience take this seriously? Is it possible to make them forget the camp status now attached to The Bad Seed and see it fresh? Or in today’s theatre, is Anderson’s adaptation too arch and tone-deaf for that ever to happen?

I doubt I’ll ever have the chance to find out. But it’s a question that interests me, both as a director – and as someone for whom the piece has unexpected resonance. The play closed on Broadway in September 1955; the film was released a year later. In between, I was born. The Bad Seed is (thank god) not my story – but its setting is my America.