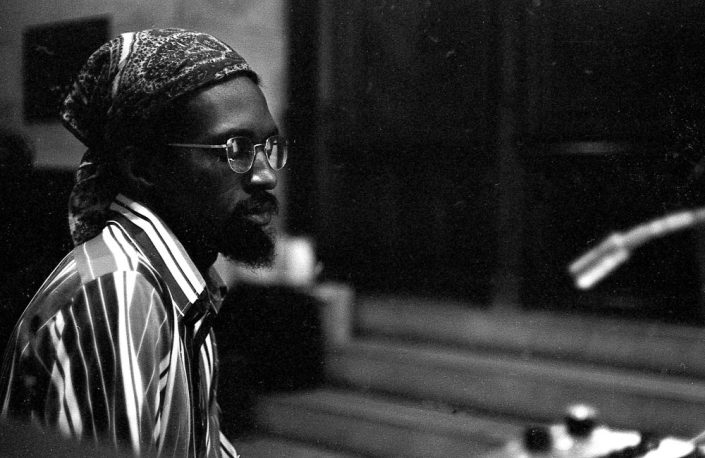 The Julius Eastman revival finally reached his alma mater, the Curtis Institute of Music, on February 22. Eastman — who died in 1990, at 49 — occupies an intriguing place in the twentieth-century classical music landscape. His brash, sometimes confrontational, often lyrical compositional language blends minimalism with Romantic sweep, with recognizable elements of jazz and pop structure also evident. Thirty years after his death, he remains uncategorizable.

For years, few even tried. Eastman died destitute and unhoused; many of his scores are lost to posterity. Others have been reconstructed thanks to archival recordings. The Prelude to The Holy Presence of Joan d’Arc, which opened Curtis’s concert #PERSONA: Exploring Identity Through Music, is one such piece. A ten-minute acapella solo for baritone voice, it was premiered by the composer (himself a gifted singer) in 1981 at New York’s legendary avant-garde venue The Kitchen.

The aria made a fitting start to a concert that juxtaposed music written to illuminate individual connections to and expressions of religion, sexuality, national and racial identity, and cross-culturalism. Eastman wrote music that intrinsically drew on his experience as a gay Black man who didn’t see himself represented in the classical canon; he identified with Joan, whom he called a “liberator,” and the efforts of the status quo to quash her revolution. The work’s simple text can be interpreted as much as an imploration to its author as it is a memorial to the Maid of Orleans: “Saint Michael said. Saint Margaret said. Saint Catherine said. They said: Joan. When they question you, speak boldly.”

Baritone Patrick Wilhelm unleashed an instrument of ringing power and dynamic control in the Eastman aria, easily traversing the ascending and descending leaps that offer emotional variation to the repetitive text. He couldn’t always steadily sustain pitches in elongated phrases, though, and his overall interpretation lacked the raw spiritual charge the composer brought to his own performance of the piece. (It can be heard here.) A greater sense of ritual and otherworldliness would have been welcome.

Perhaps Wilhelm’s performance would have gained in perspective had it been followed by the full score of The Holy Presence of Joan d’Arc. The work suits the program thematically and shows off what Eastman did best: juxtaposing the intimate and the mammoth, simultaneously drawing on and subverting traditional forms. The requisite ten cellos may have gone beyond what Curtis could provide, but the thoughtful and stylish contributions from cellists Sai Sai Ding and Nygel Witherspoon in other selections suggests there’s a deep bench of low-string talent to be tapped.

I would have preferred it to nearly all the other pieces occupying the performance’s first half. Wilhelm stuck around to deliver David Del Tredici’s “Matthew Shepard,” an art song depicting the late gay man’s final moments before he perished in the aftermath of a homophobic hate crime. With its depiction of Shepard’s soul ascending to Heaven and finding a peace that escaped him on Earth, the song is borderline offensive in its mawkishness. Pianist Reese Revak’s heavy tone occasionally swamped Wilhelm’s not insubstantial sound.

Curtis alumna Chiayu Hsu’s Urban Sketches playfully riffed on Rhapsody in Blue, with strong interplay between clarinetist Yan Liu and cellist Ding. But the overuse of electronics that represented a foreigner’s fledgling experience of America too often proved a noisy distraction.

The second half opened with the strongest of the evening’s instrumental works: The Light Is the Same, a ravishing wind quintet by Reena Esmail, a Los Angeles-based composer who marries Eastern and Western forms with beguiling clarity. Riffing on Rumi, who wrote of religion that “the lamps are different but the light is the same,” she made a similar argument for music that reaches beyond a cultural divide. The superb Imani Winds quintet premiered the chamber piece last year, but I can’t imagine it in better hands than those assembled at Curtis: flutist Fuki Wang, oboist Russell Hoffman, clarinetist Yuhsin Su, bassoonist Thomas Roy-Rochette (a particular standout) and hornist Kenshi Miyatani.

The evening closed with Luciano Berio’s monumental survey of indigenous music from around the world, Folk Songs. Impressively, soprano Sage DeAgro-Ruopp was at her most persuasive in the cycle’s most difficult settings: the flavorful “Malurous qu’o uno fenno” and “Lo Fïolairé,” sung in Auvergne dialect, and the onomatopoeic Azerbaijan Love Song. By contrast, she sounded wan in her native language, singing “Black Is the Color” and “I Wander as I Wander” with a pretty but unmemorable tone and a tendency toward vocal archness. Performing with a six-person accompaniment under conducting fellow Yuwon Kim, DeAgro-Ruopp wasn’t always consistently audible, especially when percussion was utilized.

Throughout the worthwhile but scattered concert, my mind often traveled back to Eastman. Philadelphia has been central to this composer’s rediscovery, with Bowerbird leading the charge when few other cultural organizations were interested. Now that his music has finally returned to the school where he took a dual degree in piano and composition in 1963, let’s hope the wait won’t be long to hear more.