REVIEW: Network Emerges as a Study of Male Hysteria 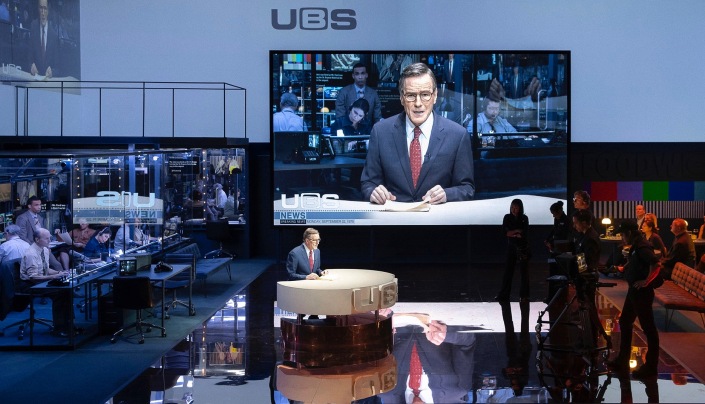 Bryan Cranston and the cast of Network. (Photo by Jan Versweyveld)

Since we perceive media mostly through sound bytes, let’s start there:

** Bryan Cranston’s unforgettable performance builds on the angst-ridden Everyman image he coined in Breaking Bad… and is, if anything, even more resonant. Astonishing!

** All of this is in service of vague and questionable ideas. Network has a very hollow center and is particularly ill-timed for our National Moment. Dispiriting.

I was a college student in 1976 when the original film of Network (screenplay by Paddy Chayefsky, direction by Sidney Lumet) opened. I saw it early on and vividly remember the polarized public response—adoration mixed with scorn, the latter including one of Pauline Kael’s sharpest reviews (you can read it here).

For those who missed Network, I’ll attempt a brief summary. At the fictional UBS network, Howard Beale (Cranston) is a distinguished anchorman whose storied career is waning. He’s just been fired by his longtime friend Max Schumacher (played here by Tony Goldwyn), president of the news division.

In an act that might be seen as either helpless mental decline or sly, intentional subterfuge—Chayefsky’s script is deliberately ambiguous on the point—Howard has a meltdown on live TV, descending into rage and profanity. Initially assumed to be the sad final note of his career, this appearance instead causes a ratings bonanza, relaunching Howard into a kind of Prophet status. Under the watchful eye of ambitious, rising star executive Diana Christensen (Tatiana Maslany here), Howard is positioned to lead UBS to untold heights of influence and popularity.

I enjoyed the movie, but I wouldn’t call myself a Network enthusiast. Even 40-plus years ago, the satire felt blunt. It’s far more so now.

To begin with, the sexual politics seem more reactionary than ever. Network’s dramatis personae teems with menopausal males whose potency—both literally in the sexual sense and metaphorically in terms of executive clout—is rapidly diminishing. In this context, the younger and provocatively beautiful Diana is a living “danger ahead!” sign, serving as both a desirable object and a dangerous, potentially power-usurping succubus.

At least in the film, the triangulated playing field was more even. Peter Finch (the original Howard) was scrappier and angrier than Cranston is here (the latter has an astonishing scene of wordless grief that nearly stops the show). Goldwyn, a terrific stage actor, is softer and more woeful than the role’s creator, William Holden. Together, Cranston and Goldwyn come across as poster boys for male hysteria.

Bryan Cranston, Tony Goldwyn, and the cast of Network. (Photo by Jan Versweyveld)

Compounding the problem in the Broadway Network is Maslany’s Diana. For all her celebrated transformational acting in her signature role on television’s Orphan Black, Maslany doesn’t fully command the stage. She comes across here as a confident but gauche young middle-manager. It’s hard to see her as a serious threat.

Faye Dunaway, then at the height of her bitch-goddess glamour, brought some semblance of humor to Diana in the film version of Network. In a key exchange from Chayefsky’s film script that’s missing here, Diana met her match in an African-American female activist called Laureen Hobbs:

It’s easy to see why van Hove would eliminate this scene—the omitted word is a highly-charged racial term. In fact, the Hobbs character is excised completely. But that makes it worse, since Diana now seems far less aware of her own limitations. Also, with the Hobbs character gone and the remaining females mostly a fleet of corporate robots, she’s more or less alone: the singular focus of male paranoia. (Schumacher’s sad-sack wife, played here by Alyssa Bresnahan, is a cliché of a different kind.)

Yet images of women populate the stage through video montage, including old TV commercials. This signature motif in van Hove’s staging (his longtime collaborater Jan Versweyveld is credited for scenery and lighting, Tal Yarden for video design) also emphasizes an almost burlesque take on female sexuality.

At one point, in vintage commercial footage, Joey Heatherton, sprawling on a screen that dominates the back of the stage, salaciously sells us mattresses. A huge brassiere from another old advertisement nearly overwhelms the conversation taking place in front of it. Was the latter meant as a wink to Midge’s architectural rendering of a bra, in Hitchcock’s Vertigo?

Of course, in the film, the battle-of-the-sexes aspect of Network was not intended or interpreted as Chayefsky’s main message. Nor is it here. Then as now, Network means to be a razor-sharp dissection of the media… or perhaps more specifically, the grip that media has on all of us gullible consumers.

But exactly what is being satirized? Good question.

Really, there is no clear dialectical takeaway from the fulminating in either this adaptation of Network or Chayefsky’s original, overblown script. Again and again, angry men argue both ends of the same non-point. TV and big business both are and are not the enemy. Truth matters, but it doesn’t. Reality and fantasy are indistinguishable from one another—sometimes.

For me, the main takeaway is that Chayefsky—and now van Hove, who adapts, disseminates, and abets him here—are the biggest male hysterics of them all.

Network’s rudderlessness is a flaw in itself. But it’s especially dire in our current political culture, when we need not simply reject all institutions as a whole. We want to believe in something; we need to. What we can—indeed should—reject is Network’s juvenile cynicism, which, rather than dismantling Trumpian paranoia, instead plays right into it.

Following the final curtain call, audience members, cheering and standing as one, were treated to a final lagniappe: a video montage of the last four decades of presidential inaugurations. The crowd cheered deafeningly for Obama; predictably, they booed loudly for our current President.

Politically, I feel the same way. Still, I had to wonder—how many people in the audience found anything at all coherent in this showy yet empty evening’s underlying message?