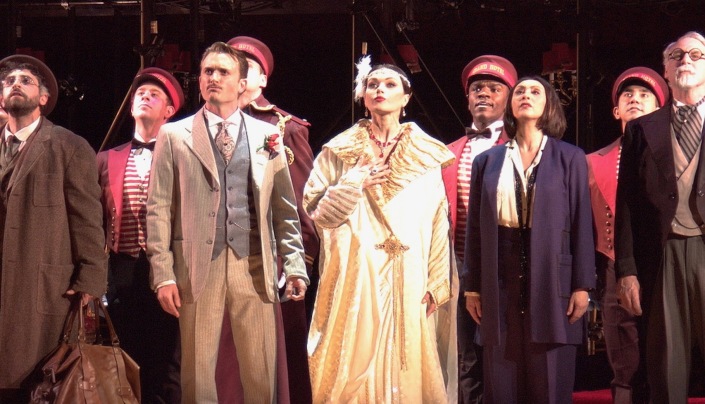 A recent theater day in New York began gorgeously. The Band’s Visit, an exquisite, delicate, very grown-up show has the subtle artistry to leave many of its complicated character arcs realistically unresolved — the rare musical where life feels real. More on this in an upcoming review. But what a shock to go next to the lurid, overwrought Grand Hotel, presented by City Center Encores, in which nothing is said once if it can shouted several dozen times by a spasmodic chorus and motley crew of principals.

“Grand Hotel, Berlin.
Always the same.
People come, people go.
Look at them.
Living the high life.
But time is running out.”

So it begins, and just in case there’s the slightest chance you might forget along the way, this theme will be beaten into the ground several hundred times. We’re in Germany, as the Weimar era is about to Charleston itself into extinction. The rich get richer, the poor struggle desperately, everybody’s screwing everybody else, and (spoiler alert) it’s going to end badly. At 100 minutes — it is Encores’ first no-intermission show — Grand Hotel is short but relentless.

There is, of course, a very famous non-singing, cavalcade-of-stars 1932 MGM movie of Grand Hotel. But the official “based on” credit here is that movie’s source: a wildly successful German novel by Vicki Baum. I’ve not read it, and it’s unclear to me whether Baum is thought to be a female Thomas Mann or the Berlin equivalent of Jacqueline Susann.

Either way, the film has a pulpy quality that the musical only magnifies. Luther Davis’s book mainly reduces complicated action (love, theft, survival, prostitution) to song cues. Wright and Forrest began working on the score in 1958; it was completed in 1989 by Maury Yeston (you can search out who did what, but I don’t know why you’d bother). Aside from a couple of effective numbers — the raucous, celebrate-even-as-we’re-going-down “We’ll Take a Glass Together”; the grandstanding “Love Can’t Happen” — it’s undistinguished.

That last number is a big, anthemic ballad. Here and more generally, Grand Hotel has a very 1980s feel, not least in the baleful, accusatorily-staring chorus that recalls Les Miz. The original production featured dazzling design (sets by Tony Walton, costumes by Santo Loquasto) and direction by Tommy Tune, very much the King of Broadway at that moment.

Two performances stood out then: David Carroll, a handsome actor with a powerful Broadway baritone-with-a-tenor-top that has never quite been equaled; and Michael Jeter, whose touchingly fragile, twitchy presence and knockout loose-limbed dancing stole the show. Their Encores’ counterparts distinguished themselves without displacing the originals. As the dashing but penniless Baron, James Snyder looks and sounds quite a bit like Carroll’s replacement, Brent Barrett, and was fine but not exceptional. Brandon Uranowitz was terrific as Otto, the moribund Jewish bookkeeper looking to have one last fling, but Jeter’s sublime oddness was unique.

Guadalupe Garcia and Junior Cervila in Grand Hotel at Encores.

Former ABT principal dancer Irina Dvorovenko played Elizaveta Grushinskaya, an aging ballerina on one last farewell tour. It’s nearly impossible to forget Greta Garbo, whose enervated-yet-electric performance on film encapsulates her own screen persona and Grand Hotel’s theme. Dvorovenko looks ravishing, dances beautifully, and strikes marvelous poses, but the character’s skittish transitions from despair to hope are largely unmarked. Points to Dvorovenko, though, for her game singing turn, which recalls the distinctive croak-to-bellow range of the musical’s creator, Liliane Montevecchi.

As Flaemmchen, a secretary hoping for stardom, the beautiful Heléne Yorke sang and danced well and had sassy comic timing, but there was a contemporary spin to her performance that didn’t fit. Natascia Diaz made something briefly memorable of the dreary role of Elizaveta’s lesbian confidante. John Dossett was appropriately blustery and snappish as the villainous Hermann Preysing. William Ryall threw himself into the role of Colonel Doctor Otternschlag, who also serves as a narrator (more baleful staring); John Clay III sang well and charmed as Erick, the Front Desk man.

But the last two roles are thin indeed, and there’s not much to be made of them. Frankly, it was the supporting singer-dancers who mostly ran off with Grand Hotel — James T. Layne and Daniel Yearwood as The Two Jimmys, and especially the astonishing Guadalupe Garcia and Junior Cervila, whose flashy ballroom twists-and-turns brought down the house.

If only it mattered more! Alas, the show itself proved a relic unworthy of resurrection. Years ago, during the original Broadway run, it was famously skewered as “Grim Hotel” in a satirical Forbidden Broadway sketch — funny, but unnecessary. Grand Hotel is its own best parody.