REVIEW: The Epic Fail of Benedict Andrews’ Cat on a Hot Tin Roof 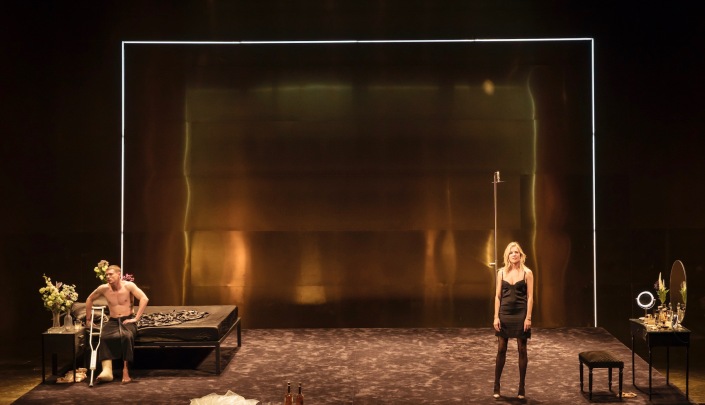 They laugh too shrilly and vamp too flagrantly, these women in their pageant-y sequin dresses and stiletto heels, but there’s no mistaking that behind gimlet-eyes, the wheels are turning—predatory, calculating, desperate.

Is this The Real Housewives of Gulfport? Guess again. It’s Cat on a Hot Tin Roof from the Young Vic, seen via HD-cast in a production by director Benedict Andrews that follows his much-praised A Streetcar Named Desire. I find his Cat better in some ways, worse in others, but on a similarly wrong-headed trajectory—to contemporize Williams’ play, and to emphasize the tawdriest aspects of it.

For Cat, that means sex and greed are on the front burner, and to give Andrews his due, both are significant themes. Big Daddy brags multiple times about the Pollitt millions and his “twenty-eight thousand acres of the richest land this side of the valley Nile!”, and he comments that for Big Mama, Europe was “just a big fire-sale, the whole fuckin’ thing.” Still, with the text illustrating the point so vividly, we hardly need it hammered as it is here, with a framing wall that looks straight from Das Rheingold.

When it comes to sex, Andrews again favors blatant over implied. There’s plenty of nudity as Brick (Jack O’Connell) showers in full view of the audience at the top of Act I… and again a bit later, this time in the presence of Big Mama. Maggie (Sienna Miller) appears nude as well.

Williams certainly understood the “merciless glare” (to borrow a phrase from Blanche DuBois) to which women were subjected, and the script of Cat includes pointed images of Southern Belles despoiled. Our first glimpse of Maggie is after she’s been pelted with a hot buttered biscuit by one of the children (mocking the absence of a “bun in her oven”?). In her rambling first act conversation, Maggie recounts the story of Susie McPheeters, a Cotton Carnival Queen who, while smiling and waving in the parade, had tobacco juice spit in her face. And Big Daddy’s cutting remarks about Big Mama are a significant plot point.

But with these images and others, Williams alludes to painful history (more on that later), and there’s always a palpable sense of sympathetic understanding. Here, the female characters—and the actresses who play them—bear the brunt of Andrews’ crudeness, without any sense that he understands Williams’ point.

Sienna Miller gives a highly accomplished, even virtuosic performance as the brashest, most defiantly strutting Maggie I’ve seen (what an evolution this role had gone through—from girl-next-door-ish Barbara Bel Geddes, to this!). But it’s a performance entirely lacking in charm or warmth. (I felt similarly about Gillian Anderson as Blanche in Andrew’s Streetcar production.)

Hayley Squires makes virtually nothing of Mae, but how could she? Here, she’s mousy, but also flouncy and immodest. Poor Big Mama (Lisa Palfrey) is the most grotesque of all, stuffed into a much-too-tight dress with her cleavage nearly bursting the low-cut top, and pouting in a baby doll voice. It’s no surprise that Big Daddy can’t abide her presence.  As if to make sure no metaphor goes unrecognized, Miller at one point crawls on all fours (Maggie the Cat, indeed).  And two principal female characters in particular—Maggie and Big Mama—frequently squat on the floor with their knees open, skirts hiked up to just below the crotch. 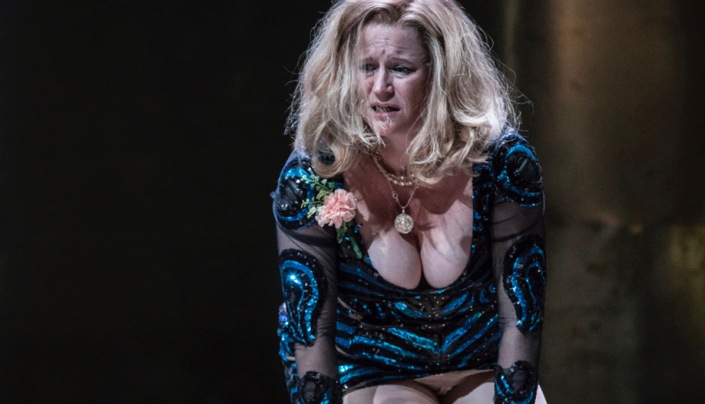 The problem goes much deeper than merely over-pointing the sensationalist side of the play. It’s the almost complete lack of lyricism, poignancy, and historical resonance in Andrews reading.

Even more, there’s no sense of context. So much of Williams—and particularly his portraits of women—are ruminations on post-Civil War south, and his inevitable conclusion that “Reconstruction” was a myth. A generation of men who returned home—defeated, angry, and effectively emasculated—bred later generations with the same traits.

But awful as Southern defeat was for men, it was even more disastrous to women, who embody the maxim of no-good-deed-goes-unpunished. Forced by the absence of fathers, brothers, husbands to step up to the plate—running plantations, keeping some semblance of a working household—their reward was to be found repulsive by men who now saw them as having lost feminine allure. (Often when I reread a Williams’ play, I remember the moment in Gone with the Wind when Rhett examines Scarlett’s hands with scorn, discovering that contrary to her attempts to look untouched by her circumstances, she’s been laboring in the fields.)

No writer captures more powerfully than Williams the effect of all this, playing out as a deep fear among his female characters that in the eyes of men, they’ve become coarse and unappealing. The epic fail of Benedict Andrews’ (I almost wrote Benedict Arnold) crude, nuance-free production is that here, they actually have.

Unsurprisingly, this Cat works best in scenes focused on the male characters. Colm Meaney is a less-hyperbolic Big Daddy than many, but an effective one who seems truly to listen. Jack O’Connell, with his sad eyes and crackly voice, is a soulful, sympathetic Brick. Their long encounter in Act II is a highlight, and—played very slowly—I’ve never seen the mounting catastrophe of Brick’s alcoholism register more deeply.

But the women suffer, and not as Williams intended. One moment in particular sums up the whole sordid approach. In the play’s final scene, Big Mama gets the upper hand—in the midst of a mass power-grab, it seems likely (and unexpectedly) that she’ll emerge as the family leader. It’s darkly ironic turn, but also one where Williams’ provides her the opportunity for some stature and dignity. Instead, Palfrey sits—no, squats—on the floor, throwing bits of birthday cake at her family members.

Such an ugly end to a glitzy but ugly evening, full of missed possibilities. Tennessee Williams wrote his female characters with compassion—why can’t Benedict Andrews see it?