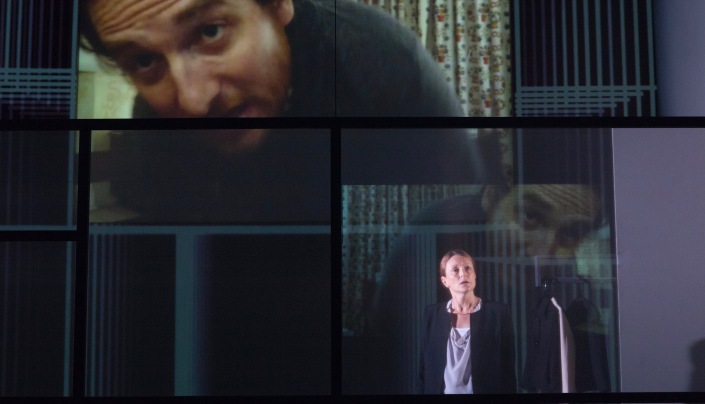 Harry Smith (on screen) and Emma Gibson (on stage) in Perfect Blue by Tiny Dynamite. (Photo by Kate Raines)

Do you feel (as I do) that the fact we can talk to people anywhere on wireless telephones—or really, that there’s a thing called the Internet that works at all—is a miracle? If so, prepare to be gob-smacked by the ambition and achievement of G. S. Watson’s new play, Perfect Blue, where one actor appears on stage in Philadelphia, while another is patched in, on-screen and in real-time, from England.

Much of the play is a dialogue between the two. They are married scientists, working on different projects (Carys develops new strains of butterflies; Michael engineers apples and other fruits), who also have radically different world views. To keep the premise intact, their conversations require perfect synchronicity. I can only imagine how challenging to would be to rehearse such a thing—or the risks of live performance.

To be sure, on opening night there was a minor glitch. The first time the actor in England appeared via the web, the picture looked great, but the sound was compromised. The production team, including on-stage actor Emma Gibson, and director David O’Connor, handled things with amazing coolness and precision (I would have had a stroke), and it was solved in a few minutes. From then on, smooth sailing—astonishingly, so.

In fact, the possibility of technical failure is both cannily analogous to underlying themes in Perfect Blue, and also part of what makes watching it so energizing. Too often, contemporary shows (especially the big-budget Broadway kind) aspire to the slick perfection of film. One of my first reactions to Perfect Blue was, how thrilling to be reminded of the without-a-net quality of theater.

Still, for me, real theatrical miracles happen through language, character, and plot, rather than technology. The compelling, entertaining Perfect Blue, a clever fusion of futurist science fiction and domestic drama, falls short of the miraculous. At 70 minutes, it’s elegant but slight, and the dystopian scare tactics are implausibly over-cooked (or at least, let’s all hope to hell that this scenario is implausible!).

But the piece is made extraordinary here by the circumstances, including excellent acting by both the corporeal Gibson and the virtual-but-real Harry Smith, crisply pointed direction by O’Connor, and especially, the fantastic design work of Jorge Cousineau, who seems to top himself with every project.

Make no mistake—Perfect Blue is a major undertaking by Tiny Dynamite, who are also partners here (with the British company, Pursued By A Bear) in the development process. Another miracle for me is seeing a small company grow be real prominence—and that’s certainly what you’ll see here.