THEATER REVIEW: In Fulfillment Center, Four Characters in Search of an Unknown Future 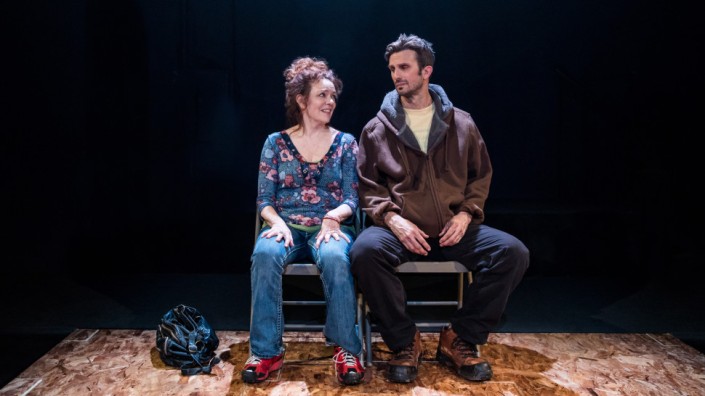 I think of realism as the style that won’t die. In college, our hipper, younger faculty decried this benchmark American theater form as having passed its artistic sell-by date decades before. Film and television co-opted it, they said. It’s lost all vigor.

At the same time, the canon of American realistic plays and playwrights remained central to the curriculum, and American actor training was (and still is) grounded in this style. “I believed what you did;” “It felt real to me”—these were the ultimate accolades acting teachers could bestow on our scene work. Emotional breakthroughs were the goal, though even then they often looked to me more like emotional breakdowns. The party line on realism was a mixed-message, to say the least.

Forty years later, the debate is unresolved. And I think that’s a good thing—it’s led to some invigorating rethinking about American realism and its current relevance. We see this examination in the work of directors like Ivo van Hove, Sam Gold, and David Cromer, whose productions of “traditional” American plays up-end realistic staging and (sometimes) acting conventions. Looking back on plays by Eugene O’Neill, Arthur Miller, and especially Tennessee Williams, audiences have also become more sophisticated in recognizing how often what once looked like realism is, in fact, quite different.

Most promisingly, a number of current playwrights—including Annie Baker, Stephen Karam, Will Eno, Lucas Hnath—handle realism in a playful, provocative way, simultaneously honoring and reinventing it. Among this group, Baker is the most audacious and wide-ranging—from moments of micro-realism (The Flick’s famous popcorn-sweeping) to the ghostly apparitional, very much non-realistic underlying world of John. Her twists and tonal surprises make for a wild ride, and an exhilarating one.

Last weekend, I saw the last performance at Manhattan Theatre Club of Abe Koogler’s Fulfillment Center, a play very much in the “new realism” mode. The title is both (too obviously) metaphoric, and literal. Four characters—Madeleine, Alex, Suzan, and John—find themselves, at least temporarily, in New Mexico. Alex (Bobby Moreno) is a manager in a “fulfillment center,” a vast warehouse that holds and dispatches merchandise ordered online. Suzan (Deirdre O’Connell), an older woman holding on to a semblance of optimism despite a life that could easily have quashed it, has applied for a job there. Madeleine (Eboni Booth) is Alex’s girlfriend, a New York transplant, not at all happy to find herself in the desert. John (Frederick Weller) is a carpenter staying (maybe in his car?) in a trailer park, where Suzan is also temporarily stationed.

The specifics are significant, yet ultimately, they matter less than an almost abstract sense of personal interaction. Koogler writes in two-person vignettes that are often fall outside a clear sense of time, place and space. Some, but not all, of the characters are linked to each other—there are no scenes between the two women, or the two men.

At its best, Fulfillment Center moves almost imperceptibly between realism and a poetic alternate reality. Daniel Aukin’s sleek production uses a long wooden plank of a stage, with little furniture and few props. (This is a very significant departure from traditional realism, and very different also from Baker’s plays, staged in detail-rich, you-are-there environments.) Sometimes, actors outside a scene are visible as they observe from a distant point; occasionally, there are moments when characters cross onstage as they move from one vignette into another.  The net effect suggests a series of satellites or particles, in motion but without a destination.

For me, Fulfillment Center was most satisfying as a vehicle for its actors, all of whom were ideally cast and excellent. Here, too, a foundation of realistic style (tears from virtually everybody) was also bent in intriguing ways. Moreno and Booth, the younger actors, seemed most grounded in a sense of real behavior. O’Connell and Weller, playing the older, odder characters, gave finely-crafted performances that were ratcheted up several notches from traditional realism. (Weller’s formidable ability to suggest in even his quietest moments that something scary could break suddenly is put to good use here.) There’s some lovely moment-to-moment communication, funny and heartbreaking.

Yet, in the end, I found Fulfillment Center… well, not entirely fulfilling. It reminded me of my reaction to Will Eno’s The Realistic Joneses, which had some marvelously quirky, disorienting pieces, but failed to cohere as a whole.  But I’m glad to be introduced to Koogler’s work, and look forward to more.