THEATER REVIEW: In Everybody, Branden Jacobs-Jenkins Rethinks the Afterlife 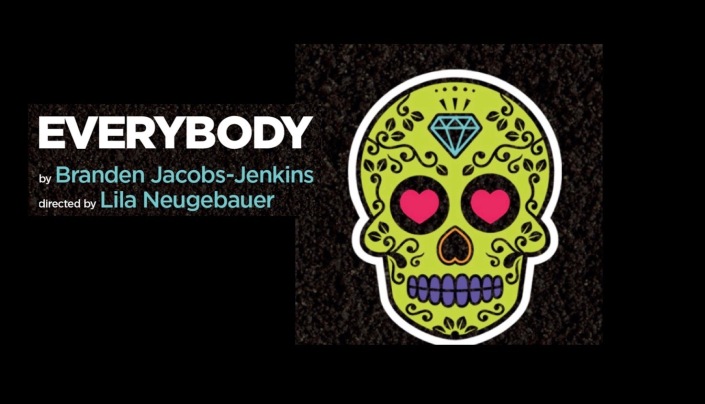 Theater history students (and a few other intrepid souls) know the special challenges of reading certain canonical works of early English drama. These include Knight of the Burning Pestle, Ralph Roister Doister—and most especially, that perennial feel-good hit, Everyman. (Plot summary: you’re going to die, you’re going to be alone, and you almost certainly haven’t done enough good things in your life to deserve anything better).

It is the theater history students of the future who owe the greatest debt of gratitude to Branden Jacobs-Jenkins, who has turned his mad playwright/adapting skills to that grimmest of all English language dramas. If Everybody falls short of the revelatory work Jacobs-Jenkins did in An Octoroon, it nonetheless manages a similar feat. Everybody simultaneously remains faithful to Everyman, while annotating, dissecting, and reinventing it. More important, he’s made it fun. Everybody is an absolute delight, which is something said of Everyman by no man ever.

The techniques employed here will be pleasingly familiar to those who know An Octoroon.  To start, Jacobs-Jenkins takes the source material seriously, preserving most of the plot. A quick summary of Everyman, for real this time: as the solitary title character is called to the afterlife, he attempts to find others who will accompany him on the journey—each of these allegorical figures (they include Strength, Beauty, Greed, and more) turns him down.

But Jacobs-Jenkins has given the piece an updated frame and, as the title suggests, a far more diverse and inclusive dramatis personae. He frequently stops the action to digress and provide commentary, and these interruptions are some of the best moments in Everybody, many of them provided by Jocelyn Bioh and Marylouise Burke. (I shouldn’t say much more, since surprise is huge factor here, but the program indicates that Bioh plays a triple role: Usher/God/Understanding.)

Jacobs-Jenkins’ love of bold theatricality is amply evident here, including some quite marvelous visual wizardry in Lila Neugebauer’s staging.  At each performance of Everybody, specific parts are assigned to the ensemble actors through a lottery. In practice, this is the fullest realization I’ve encountered of gender- and race-blind casting. At the performance I attended, the title role was played by Lakisha Michelle May. 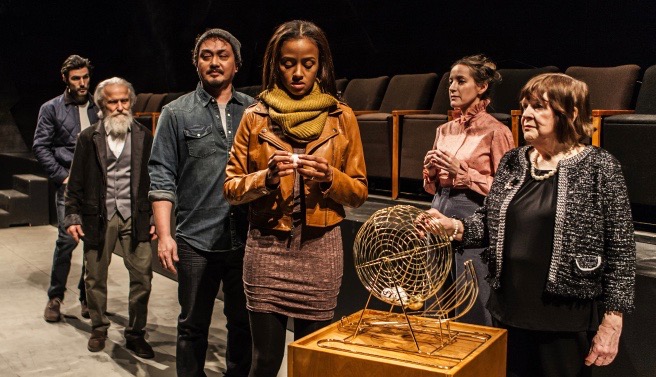 The ensemble cast of Everybody at Signature Theatre. (Photo by Monique Carboni)

Raucous, edgy humor abounds in Everybody, but what’s more impressive is that some of the somber, introspective heart of the original play is preserved. On the other hand, what’s lost here that is central to Everyman is a sense of shock and awe.

Would it be possible to evoke that kind of response in a contemporary theater audience (especially one largely comprised of hip New Yorkers)?  Maybe not. Jacobs-Jenkins spins the hell out of Everyman, with compelling results. But the original play, with its simple, what-you-see-is-what-you-get structure and its unquestioning acceptance of the afterlife, minimizes the satirical possibilities.

Good as Everybody is, it is less layered and sophisticated than An Octoroon.  Is the lesson here that adaptation has its limits? Perhaps. Or maybe it’s that today, riffing on religion is far less controversial and provocative than riffing on race.

Everybody runs through March 19. For more information visit the Signature Theatre website.