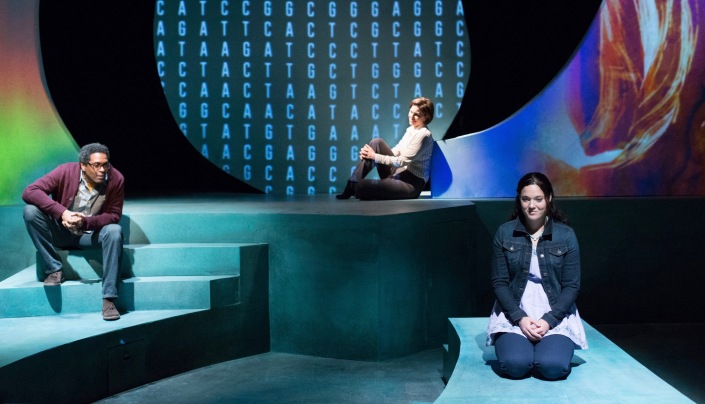 Would that all science lessons were as gripping as the first half of Informed Consent. Though I’ve seen too many recent plays where the cast function as both narrators and characters, author Deborah Zoe Laufer does it with uncommon panache.  She throws a lot of ideas at us, and the action is fast-paced and vigorous. Director Kathryn MacMillan’s imaginatively-staged production moves people and conversations all over the playing space—again, we enjoy the challenge of keeping up.  In the principal role of Jillian, a genetic physicist with a problem of her own to solve, Kittson O’Neill’s intelligence and confidence make us root for her, while also feeling wary.

It’s a good story, too, with twists-and-turns. Jillian is (irony of ironies) herself a genetic time bomb.  In her 30s, she’s already showing signs of Alzheimer’s disease that prematurely took her mother, too: it’s inevitable, coded in their DNA. When Jillian is approached to do research on a tribe who live very much to themselves in the Grand Canyon—their genetic issue is diabetes—she jumps at the chance, knowing they are also excellent subjects for her own research. But it means stretching the accepted rules of informed consent for test subjects…

While Informed Consent is on this trajectory, it’s engaging and enjoyable. Around the midpoint, though, Laufer adds backstory about Jillian’s family life. I assume the subplot is meant to provide humor, but the play loses momentum, and groans under a surfeit of additional issues. Mixed-race marriage, parenting challenges—Informed Consent feels like an NPR mash-up. The tone, too, turns cloying—it’s never a good idea to have adult actors play young children. (Ensemble member Samantha Bowling slogs through this, but she is especially good and winningly understated in her grown-up persona.)

Still, Informed Consent begins well and ends well—the last scene is both touching and provocative. Laufer raises many good points, and is smart enough to know that they can’t be tied up neatly.  I can imagine many audiences—young people especially, but not exclusively—who will enjoy it.  Though I freely admit that I prefer my theater less obviously issue-driven than Informed Consent, it stayed with me.