THEATER REVIEW: Last of the Red Hot Lovers — Comedy That May Not Have Stood the Test of Time

Fran Prisco and Karen Peakes in Last of the Red Hot Lovers at Walnut Street Theatre. (Photo by Mark Garvin)

If you know anything about Neil Simon—America’s beloved playwright, whose zingy New York comedies were the 1960s Broadway gold standard—you’ll probably have guessed that the title is ironic.  Barney Cashman is the unlikeliest of Don Juans. A shlubby restaurateur in his late 40s, Barney can often be found wrist-deep in a bowl of clams; his middle name would not seem to be “Romance.” Nonetheless, Barney’s three awkward attempts at stepping out on his wife of 20-plus years are the subject of Simon’s 1969 play, Last of the Red Hot Lovers.

There’s a telling moment early on, as Barney (Fran Prisco, amiable and rubber-faced) nervously awaits his date. He drenches himself in spray cologne, paying special attention to his hands—he fears the fishy smell on his fingers will be a turn-off. It’s a funny moment, but also poignant. Indeed, the story of Red Hot Lovers strikes me as profoundly sad—a study in lost souls seeking to make connections.  But typical of Simon’s writing, the emphasis here is on Borscht Belt-style yucks. 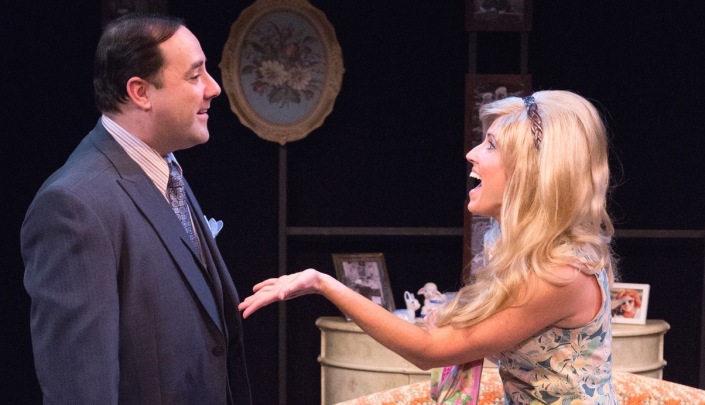 Fran Prisco and Karen Peakes in Last of the Red Hot Lovers at Walnut Street Theatre. (Photo by Mark Garvin)

I’ve always heard that actors love to play Simon because he gives them so much sure-fire material to work with. That’s certainly evident here. At Walnut Street, the female characters (originally envisioned for three performers) are all played by Karen Peakes, a resourceful comedienne who delineates them with real skill, and finds creates some delicious moments in each role.  Peakes’ tour-de-force is the chief reason to see Red Hot Lovers.  Prisco also does good work, though sometimes the physical shtick is too broad.

In truth, both actors could afford to take it down a notch.  I wonder what would happen if they—and director Adam Immerwahr—had played more of the show for the underlying pathos?

On second thought, scratch that. It’s not the Neil Simon way. This revival of Last of the Red Hot Lovers traffics in nostalgia for the 1960s, and listening to chuckles of pleasure coming from the audience, it delivers them.  For me, the play is a window also into a kind of high-gloss comic writing, full of casual stereotyping, that hasn’t aged well.  For better or worse—this is theater of another era.