Did she or didn’t she? That is the (first) question.

In 1893, a pleasant-faced, quiet, 32-year-old spinster Sunday school teacher was acquitted by a jury of her peers of murdering her father and stepmother with an axe.  But a broader presumption of guilt has always followed Lizzie Borden. We see it in retellings in theater and music, including Agnes DeMille’s ballet, Fall River Legend, and Jack Beeson’s opera, Lizzie Borden: A Family Portrait. There’s also my personal favorite, the Lizzie Borden hoedown from New Faces of 1952. A sample lyric:

The hoedown number is, obviously, irreverent. DeMille’s ballet and Beeson’s opera, on the other hand, take Lizzie and her story very seriously.

Which leads to the second question: how do you like your Lizzie—as a high-minded social and psychological case study, or a camp artifact?

In Lizzie, the rock opera setting of this story onstage at 11th Hour, the answer to the first question is… I’m not going to tell you. (Part of the interest in every setting of the story is how the authors play with issue of innocence or guilt.)

As for the second question, one clue is that while the show retains some sense of its period setting, there’s a deliberately ironic disconnect in the hand-held microphones, steam-punk costuming, and often raucously rock-inflected score. I’ll bet Lizzie’s creative team (Steven Cheslik-Demeyer, Alan Stevens Hewitt, and Tim Maner are variously credited with music, lyrics and book) have more than a passing acquaintance with the musical of Spring Awakening.

At the same time, the writers show considerable empathy for Lizzie.  One of the good ideas here is framing the story with only four characters—all female.  There has always been an interesting feminist reading of the case, which emerges here.  The quartet set-up also suits a rock band, which in effect is what Lizzie’s dramatis personae become. 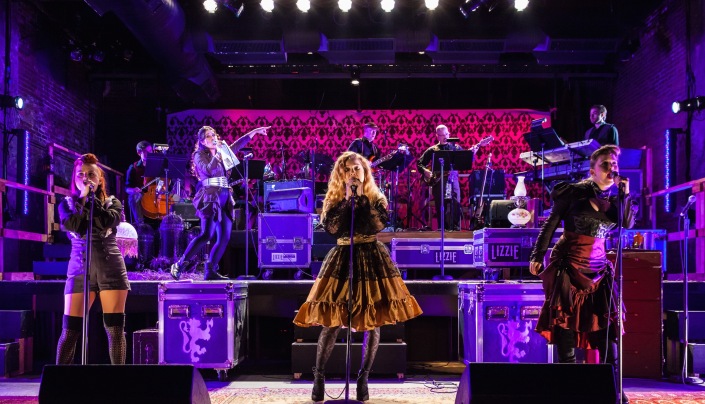 The Cast of Lizzie at 11th Hour. (Photo by Daniel Kontz)

There’s also range and ambition in the score.  I found Lizzie most effective in its softer moments, including a lovely Shaker-style hymn toward the end of the second act.  The quieter music also reveals the high caliber of all four voices here.  The louder sections—which make up most of the show—are more generic, and lyrics are sometimes lost in a tidal wave of amplification.

Director Kate Galvin’s clever production deftly straddles the musical theater / rock concert divide, and the ensemble (Alex Keiper is Lizzie; the other actors are Cara Noel Antosca, Meredith Beck, and Rachel Brennan) give their all to the material, as does the excellent band (directed by keyboardist Dan Kazemi).

But there’s not much in the score that lives on in memory or illuminates the story.  The cool factor is high, but the hipster overlay ultimately waters down the most interesting aspects of the legend.  What made Lizzie herself into a celebrity (which she unquestionably was, at least in yellow journalism terms) was that she seemed far too ordinary and well-behaved to kill her parents.  As she’s portrayed here, in constant vocal overdrive and wearing her anger like a tattoo, we only wonder why she waited so long.