THEATER REVIEW: Arden’s A Year With Frog and Toad Looks Better Than Ever

Jeff Coon and Ben Dibble in A Year With Frog and Toad at the Arden Theatre. (Photo by Mark Garvin)

A dozen years ago, I reviewed Arden’s first mounting of A Year With Frog and Toad – I loved it then (as did virtually everybody, critics and public alike), but this is my first return trip.  To my great delight, the show looks better than ever.

If you haven’t seen it before, let me fill you in on few details.  It’s a sweet little musical by the Reale Brothers (playwright Willie wrote the book and lyrics, Robert is the composer), based on Arnold Lobel’s beloved stories.  Frog and Toad celebrates friendship in the sweetest possible way, and it’s the rare children’s show that adults will find genuinely delightful.

Especially so here, in director Whit MacLaughlin’s picture-perfect production, full of imaginative surprises. (The conceit of the show is that the characters of Frog and Toad appear not as anthropomorphized animals, but as dapper gents circa the mid-1920s.)  There’s a chamber-ish scale to the piece, which is accompanied by a small off-stage combo; aside from the two leads, an ensemble of three actors — Leigha Kato, Elexis Morton, and Steve Pacek — take on the remaining roles. They are, I believe, new to this revival, and they’re terrific, individually and together. 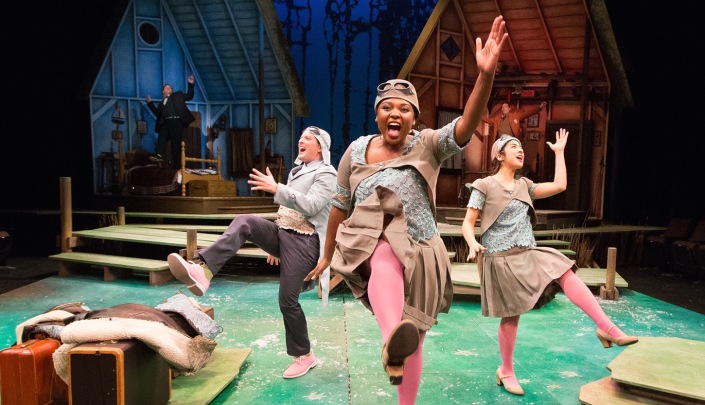 Steve Pacek, Elexis Morton, and Leigha Kato in A Year With Frog and Toad at the Arden Theatre. (Photo by Mark Garvin)

The Frog and Toad are certainly not new — they are Jeff Coon and Ben Dibble, who originated the roles in this production more than a decade ago.  They were then early in careers which have continued to flourish in Philadelphia; and of course, since time stands still for no one, they have moved from younger leading man roles to somewhat more mature ones, and even the occasional character part.

Yet here they are, looking and sounding as fresh as ever.  Coon is Frog, the cheerful, easy-going one; Dibble is Toad, the high-strung worrier.  They’re a perfect match in every possible sense —and as charming a local holiday tradition as the Wanama… er, Macy’s light show.

What else do you need to know? Stop reading and order your tickets — for you and every kid you know.  And if you’ve seen it before, see it again.  (And make sure you stay after for the Q&A with the cast.)  After the battering year we’ve all had, the sweet hopefulness of A Year With Frog and Toad could not be more welcome.

A Year With Frog and Toad runs through January 29. For more information visit the Arden Theatre Company website.