Q&A with Jen Childs, Mary Martello, and Monica Stephenson of The Carols 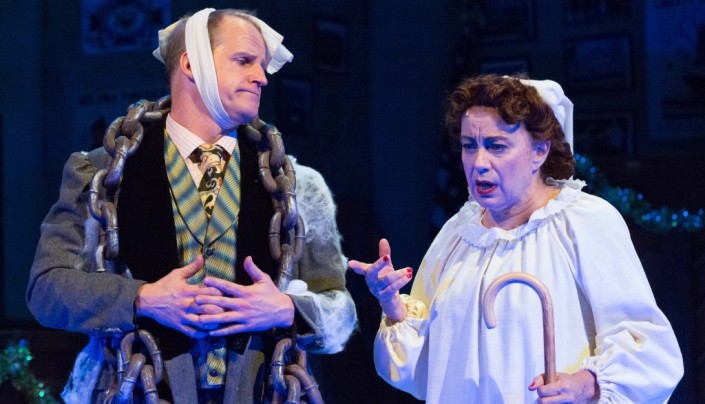 Anthony Lawton and Mary Martello in The Carols at 1812 Productions. (Photo by Mark Garvin)

Since 1812 Productions began almost 20 years ago, the company mission has been comedy. Their holiday shows in particular are a beloved local tradition. Mostly these have taken the form of revues, mixing sketches and songs.

But this year, Producing Artistic Director Jennifer Childs, in partnership with composer Monica Stephenson, has created a new piece, The Carols — an adaptation of Dickens’ A Christmas Carol — that will be their first original holiday musical book show. I talked with Jen, Monica, and The Carols’ star, Mary Martello, about the show, the creative process, and the challenges of trying to be funny in our turbulent historic moment.

Your holiday revues have always been a favorite. What made you change formats this year?
Jen: Since this is an election year, we moved This Is The Week That (1812’s political review) to October-November, and I didn’t want do another revue. I feel I’ve done that format for now. I like to offer variety — and I realized that most of our holiday shows aren’t really about the holidays, so I thought it would be fun to try that. I feel like The Carols is a show that found me. It’s not what I planned to write — but it comes from my own traditions, my own family holidays.

How so?
Jen: I’m one of three sisters, so there were always women around. And I’ve always loved The Andrews Sisters, those close vocal harmonies for women. I like to think that sound is agreement and argument at the same time.

Emily Kleimo, Rachel Camp, and Caroline Dooner in The Carols at 1812 Productions. (Photo by Mark Garvin)

Monica, when do you come onboard as composer?
Monica: I’ve known Jen for ages. I worked for 1812 as a staff member and in many other ways, before I moved back to Pittsburgh to start a family. So Jen knows me as a musician and vocalist, and she thought I’d be a good match. I came into the project in March — that’s a short time to write a musical! But Jen called and said “I’m doing a holiday show, there would be three sisters and she wanted Andrews Sisters-style harmony.” Well, she had me at that — I’ve been a fan since high school). We started with a few songs, and then a few more. We realized there was so much heart in the material. So we kept adding, and adding — and soon it was a full musical.

Mary Martello, when did you join in? By the way, you’re having an amazing season!
Mary: I know, it is amazing, isn’t it? I keep wondering if it’s a sign that I should retire (Editor’s note: don’t worry, it isn’t). But at the beginning of the audition cycle, I was really just trying to line up work to take care of the mortgage and bills. I saw Jen was doing this show, with a Scrooge-like landlady character, and I told her I’d love to audition. At first she said, no — she was thinking of Joilet Harris for the part. Well, I love Joilet. We’re a bit like professional sisters — we sometimes joke that I’m the white Joilet Harris, and she’s the black Mary Martello. We’ve talked about doing a cabaret act. So I let it go — but later, out of the blue Jen texted me, saying yes, I do want you. And here I am.

How did the show take shape?
Jen: I began thinking about my Christmases and how they’ve changed — my work schedule means I spend the holidays with my colleagues and friends like Tony Lawton, and that’s the new tradition. But I wanted to foundation of the show to be women, so I thought about what’s a context in which there are more women around then men. Wartime of course — so we decided to set it in World War II. And we added a male character — a Borscht Belt comic who is too old to serve, and is the only male around to do the show.

Speaking of turbulent historical times, you worked on this during the election. How did that affect the process?
Mary: The day after the election, I came in and everyone was crying. It was hard. Jen said, if you need to stop and cry, you need to do that. People in the room were afraid, angry.
Jen: We’d been doing this joyful work, with a diverse cast, laughing together — then suddenly, everything was different. One of our songs lyrics, “It’s an upside-down little world,” suddenly felt profound — and, “Please, sir, may I have some more?” I was so grateful to have this group. It became very important to create something about love and redemption.

I understand the show itself changed during this process?
Jen: The Carols opens with the line, “Marley is dead.” When my friend (playwright) Michael Hollinger came to a rehearsal, he said, “after that line, death disappears from your show — but it’s World War II.” And I realized we needed to not skate over the top; that comedy comes in reaction to the darkness.
Monica: We changed the show’s year from 1943 to 1944 — from before D-Day to after, when the stakes were higher. There had been more devastation, more uncertainty. A brother has been killed. This was now not their first Christmas alone, but one of several, with no end in sight. One particular song lyric, “More life, more love, more joy, more tears” became the important one. A sense of community, accepting others, making something beautiful together. That’s what wanted.

Your company has defined itself so much through comedy — do you have any fear that audiences will be put off by the darkness?
Jen: I feel good about the choices. Sometimes, I fear I’m more interested in joy than in the theater! And this is a piece that’s big on joy, the importance of putting positive messages out. After the election, I wondered what I could do in response — petitions, marches. I realized it should come through my work, through messages of positivity and love and acceptance. I have a daughter in school — I want her to know what’s possible.
Mary: And don’t forget, there’s still a lot of comedy! This is a funny, funny show. I think the over-arching message is, come — and you’ll laugh your ass off.

The Carols plays through December 31. For more information, visit the 1812 Productions website.