THEATER REVIEW: In Grounded, the Gulf Between Earth and Stars 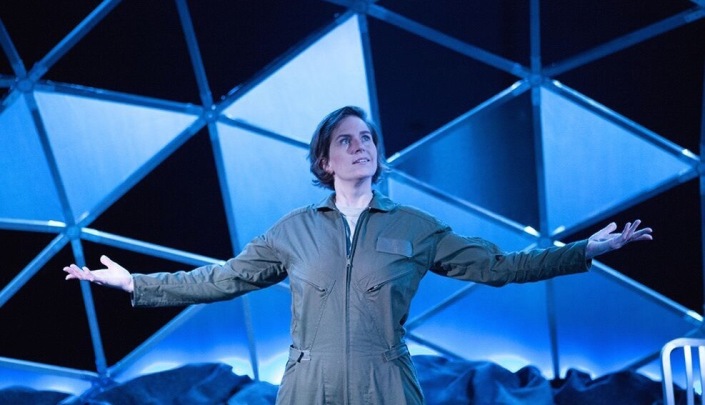 The blue sky – its vastness and freedom – first enthralls the Pilot in Grounded.  But as the title suggests, the downward pull of earthly responsibilities proves inescapable.

Did I mention that the character — the only one in George Brant’s solo play — is female? It’s the first of several sly touches in Grounded. From the start, she tells us how much she loves the thrill and power of her career as a wartime fighter pilot. She parties hard, too.  Casual sexual encounters are described unflinchingly. We’re charmed by the Pilot (embodied here by Kittson O’Neill with a winning smile and a touch of crude swagger) in part because, not long ago, this kind of “player” role was exclusively male territory. Not anymore.

The story soon shifts gears, though, as the Pilot marries, and has a daughter. When she goes back to work, it is as a drone operator in the “chair force,” as she ruefully describes it. Nevertheless, she comes to find it compelling — even to the point of obsession.

From here, Grounded focuses on the growing disconnect between the Pilot’s personal life (trips to the mall and the Las Vegas strip, childcare) and her highly focused, even deadly job (though that too has the alienated quality of a video game). Many will see Brant’s central theme as a treatise on PTSD.

I found Grounded intriguing but repetitive, and overlong at 80 minutes. Still, I think it can work in the theater.  What’s absolutely crucial, though, is that we feel immersed in every aspect of the Pilot’s nightmarish world.

O’Neill creates a likeable and believable character, but there’s not much variety in her performance, and individual moments don’t always register with specificity.  The production itself should help, but here we have a single set — a partial geodesic dome — that stands in for every location.  Both scenery and lighting are in their way quite beautiful, but neither they nor director Kathryn MacMillan’s generalized physical blocking do enough to reinforce the fragmented but vivid locations and events that the text describes.

I’m all for an abstract, rather than realistic, approach — the play virtually invites creative solutions. But the bare-bones production we have here isn’t enough. At InterAct, Grounded rarely achieves lift-off.