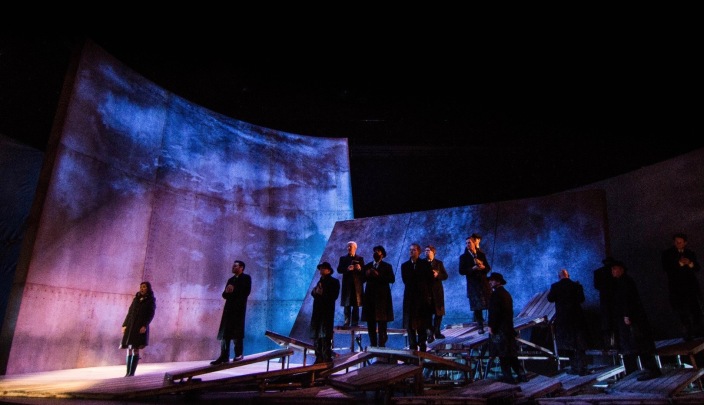 Breaking the Waves at Opera Philadelphia. (Photo by Nicholas Korkos)

It’s a week that effectively demonstrates Opera Philadelphia’s growing presence and ambitions.  There’s a gala opening in grandly traditional style — Puccini’s Turandot, at their home theater, the Academy of Music.  The next day brings a collaboration with the African company Third World Bunfight, in a remix version of Verdi’s Macbeth that is also part of the FringeArts.

No doubt the major news (and the biggest risk) took place Thursday night at the ideally-sized Perelman Theater — the world premiere of Missy Mazzoli and Royce Vavrek’s operatic setting of Lars von Trier’s fascinating but bleak and disturbing film, Breaking the Waves.

Chief among the successful elements is Mazzoli’s music. She writes gracefully if not always memorably for voices, in a style that shows some influences (Benjamin Britten, in the melismatic flights) but is distinctively her own.  I particularly like a signature motif of phrases that end with unexpected upward or downward slides, capturing some of the unsettling feeling of von Trier’s… well, love story (if we can call it that).  But Mazzoli’s greatest triumph is the often marvelously original orchestral textures, which include some surprising instrumentation (glockenspiel, melodica, tam tam, car suspension spring, and even, briefly, an onstage record player).

I have more mixed feelings about Vavrek’s libretto.  The challenge is a very complicated story, set in 1970s Scotland, where a young woman (Bess) marries a Scandinavian oil rig worker (Jan) — it’s a doomed relationship compounded by societal pressures, and one that ultimately turns tragic.

Vavrek compresses the action, which is unavoidable.  But damagingly, he leaves out important subtleties in von Trier’s elliptical movie. Jan is a much more complex character than he emerges here.  Vavrek also misses the crucial mood of stultifying village life. Long sections of the movie are virtually silent and action-free. That wouldn’t translate well to opera, but the result here pushes the story into a modern take on a 19th century theme — the woman driven mad by love. The lack of nuances also makes the final scenes even more brutal. (Breaking the Waves is not for the faint of heart).

The design work also doesn’t quite capture the milieu.  Adam Rigg’s scenery, Adam Larsen’s projections, and Pablo Santiago’s lighting are arresting in themselves — but the drab gray-browns of a small Scottish town give way to a sophisticated, abstract, often beautiful urban theatricality. 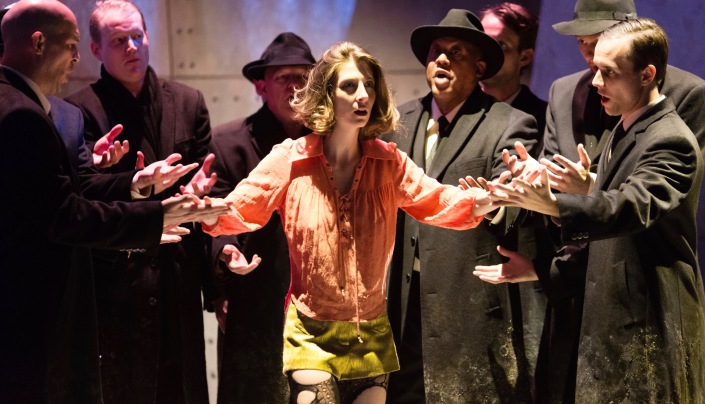 Kiera Duffy and Ensemble in Breaking the Waves at Opera Philadelphia. (Photo by Dominic M. Mercier)

Taken on its own terms, though, Breaking the Waves is a very significant achievement — exceptionally polished and accomplished. Kiera Duffy gives a tour de force performance as Bess; she easily conquers the role’s many difficulties (including a very high tessitura, considerable physicality, and some nudity), and her crystalline lyric soprano is a pleasure in itself.  Baritone John Moore is a formidable Jan (his role, too, is physically challenging), and there is fine supporting work, especially by mezzo Eve Gigliotti and tenor David Portillo.  Conductor Steven Osgood and the orchestra do honor to the gorgeous orchestral palette.

I don’t always take the opening night audience’s response as a good barometer of a new work, but this time, I think they got it right.  The final scene clearly disturbed some. There were audible gasps, and a moment of silence when the lights went down.  But then — whoops and cheers.  There are flaws in Breaking the Waves, including some that I think can’t be fixed.  But it’s a powerful new work, and one that should be seen.

Opera Philadelphia is on an upward trajectory, and audiences can feel it.