THEATER REVIEW: Art and Identity in 36 Views at Lantern 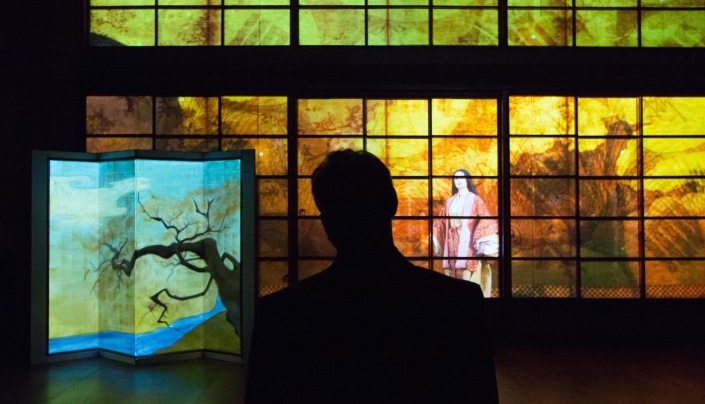 Ivory. Rubies. Opium. The alluring catalog of treasures articulated by art collector/dealer Darius Wheeler at the beginning of 36 Views distills a familiar kind of oriental (and I use the word advisedly) mystique — a blend of the precious, exotic, and dangerous. But as my heart began to sink (not this again, I fretted), it soon becomes clear that Naomi Iizuka’s play is much bigger than that.

In fact, it’s a hugely ambitious study of the high-stakes world of art collecting, its pleasures and risks (how can we distinguish forgeries from the real thing?) — as well as a deeper examination of identity (what kind of people would choose to play in this particular sandbox?). In addition to all this, there’s a secondary plot about a 1,000 year old memoir.

I have mixed feelings about 36 Views — so, with the title in mind, I’ll frame this in two mini-views of my own — one positive, the other not so much.

View II (ho hum). The people (in particular the females, who seem to exist largely in relation to the men) aren’t as fully realized as the plot. One female character in particular, a brash young artist (overacted here by Bi Jean Ngo) feels like a dramaturgical device rather than a human being. Much of the dialogue is Big Talk about art and literature that seems more to show off the writer’s erudition than to sound like actual conversations. In the end, I’m not sure the Kabuki theatrical devices here enhance the play — they made me wonder if Iizuka, in commenting on Western appropriation of Asian art, is actually trafficking in it herself.

So there you have it. Given the complexities of the show, and its many assets, you should probably judge 36 Views for yourself. My two views may not be yours.