THEATER REVIEW: Questioning the Nature of Belief in The Christians at Wilma 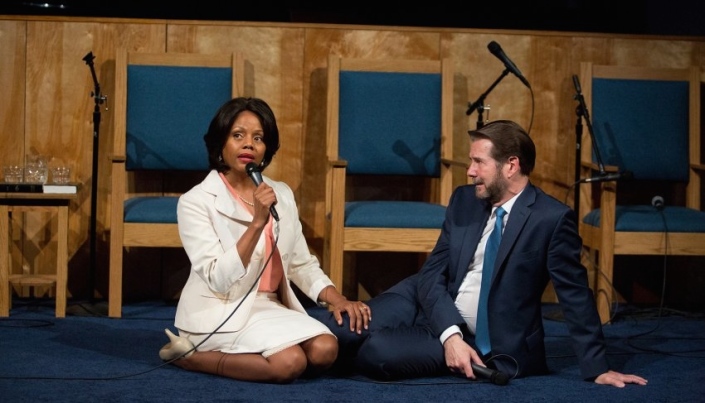 Erika LaVonn and Paul DeBoy in The Christians at the Wilma Theater. (Photo by Alexander Iziliaev)

Come unto me, all ye that labour and are heavy laden, and I will give you rest.

The Bible is full of promises to the faithful, though most are unlikely to be realized during our temporary stay on earth; also, they’re fairly vague. So it falls to emissaries — pastors and the like — to give us clearer directives on the correct path to everlasting glory.

But “Time is filled with swift transitions,” as the church choir sings in Lucas Hnath’s sly, thought-provoking The Christians, now on stage in a marvelous production at the Wilma. We regularly encounter difficult situations that test our faith. And what happens if we’re wrong — if what we thought was the path to righteousness isn’t what we’ve been taught? Will our spiritual leaders have the honesty and fortitude to tell us?

In just such a moment, in a local church somewhere in America, Pastor Paul takes the pulpit, and preaches that he no longer believes Hell is a physical place — it is, he now realizes (after a private conversation with God), more of a state of mind.

Paul’s announcement is brave, risky, foolhardy, or cynically, even ruthlessly timed (his large church has only just pulled out of debt) — it depends on who you ask. But what is clear is that within minutes, a congregation that initially looked like a perfect, multi-racial happy place is torn asunder. While Paul goes one way, Associate Pastor Joshua and Church Elder Jay will go another. Where the parishioners — and Paul’s supportive wife, Elizabeth — will land is uncertain.

In 85 taut minutes, Hnath launches a discussion on the fundamental nature of belief with a level of nuance I couldn’t have imagined. Paul’s initial revelation is, I think, heard by a large percentage of the audience as welcome and humane. Yet over the course of the play, we have many reasons to question it — and our own convictions. For example, there’s the moment when Jenny, a timid member of the choir, steps forward to talk to Pastor Paul, in a game-changing monologue that is funny and heartbreaking, sometimes all at once (actress Julie Jesneck is marvelous here). 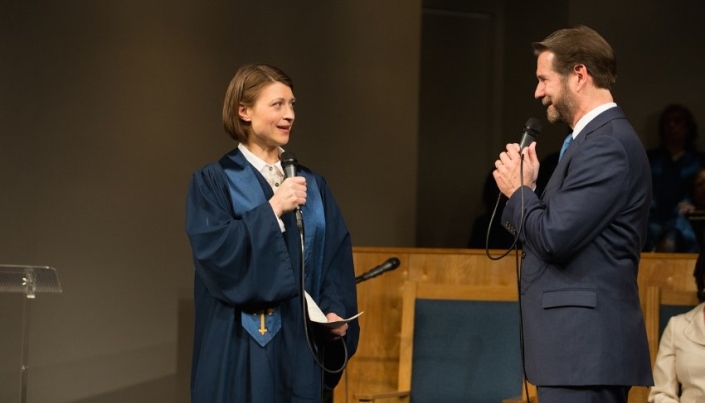 Julie Jesneck and Paul DeBoy in The Christians at the Wilma Theater. (Photo by Alexander Iziliaev)

Most admirably, Hnath never condescends to any character or belief — these are good people, grappling with big, difficult ideas, and doing the best they can. That’s what makes it so damnably hard — and so compelling to watch.

The structure of The Christians is as out-of-the-box as its themes. Initially, we seem to be watching a real church service, realistic to the smallest detail. Gradually, Hnath introduces other elements — we move out of the church and into private conversations, while the scenery and basic style don’t change. It’s a daring break in convention, and I think some audiences will be thrown off — but the sense of disorientation brilliantly echoes the play’s bigger issues.

All of this is delivered in a pitch-perfect co-production by Wilma and Syracuse Stage, directed by Tim Bond. The actors are excellent – in addition to the aforementioned Julie Jesneck, they include Ames Adamson (Elder Jay), DeLance Minefee (Joshua), Erika LaVonn (Elizabeth – she’s especially good), and Paul DeBoy (Pastor Paul).

The presence of the exuberant Philadelphia Community Choir lends authenticity, and their rafter-raising singing gets the audience on its feet. In the end, though, it’s Hnath’s bold, beautiful play that is the greatest cause for rejoicing. 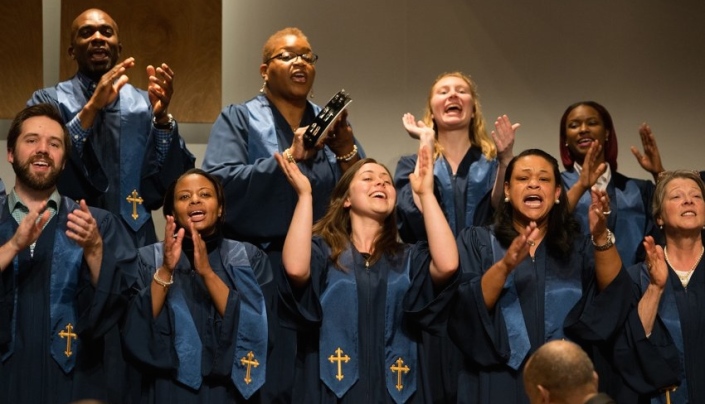 The Philadelphia Community Choir in The Christians at the Wilma Theater. (Photo by Alexander Iziliaev)

The Christians runs through May 29. For more information, visit the Wilma Theater website.