THEATER REVIEW: In The Ballad of Trayvon Martin at New Freedom Theatre, History Looks All Too Current 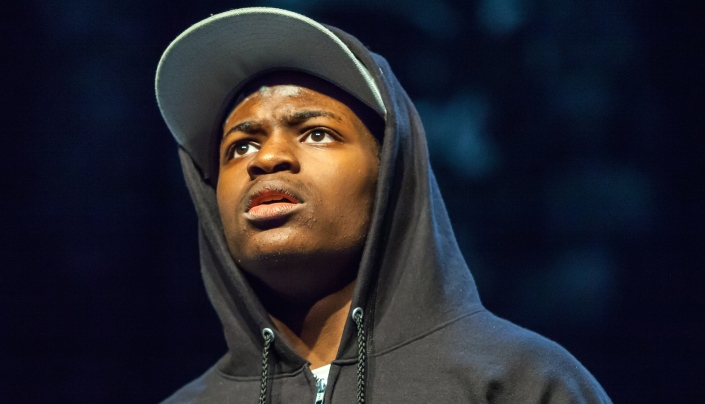 Amir Randall in The Ballad of Trayvon Martin at New Freedom Theatre. (Photo by Ethimofoto.net)

It’s been a number of years since I attended Freedom Theatre, and I’m happy to return as they celebrate their 50th anniversary. The company, now called New Freedom Theatre, has always been more than a performance venue — their work includes substantial educational programs and outreach in the African American community.

Tonight, though, I’m here to see a play — and what I realize first is how much I’ve missed their theatre — truly, one of the finest in town, ideally intimate for a play (around 300 seats); contemporary, but with a grandeur of scale and design that also recalls the great theatres of another time. That connection to our history is present too in its location on North Broad, once the home of the great Philadelphia-born actor, Edwin Forrest.

It’s good to be back.

As I said, the Freedom tradition is more than simply performances — it’s a relationship between theatre and community. That has never been clearer than here, in The Ballad of Trayvon Martin, a work written by Rajendra Ramoon Maharaj and Thomas J. Soto (Maharaj also directed and choreographed) — but one that has the feel of devised theatre, with the eight-actor ensemble (Amir Randall as Trayvon; with Angel Brice, Donna Cherry, Julian Darden, Michael Fegley, Shabazz Green, and Stanley Morrison, and Christopher David Roche playing the remaining roles) seeming fully engaged in the process.

Ballad is indeed focused on the life and especially the death of Trayvon Martin, but initially, the piece eschews conventional narrative in favor of a kind of storytelling collage. A pair of phenomenal hip-hop dancers embody Trayvon, as statements about him are heard in voice-over. Most effectively, his story is told in tandem with the 1955 murder of Emmett Till — it’s an apt and shocking parallel.

Those early scenes are, for me, the best part of Ballad. As it transitions into more standard narrative, it loses some of its force. My formal role here is as a critic, and in that capacity I see a number of problems with the piece, which looks like it’s still in some stage of development. It’s over-long and repetitive — the play would work better as a long one-act. There’s no attempt to be unbiased, and while that’s not a requirement (I don’t feel unbiased about Trayvon Martin’s death, certainly), the contrast between George Zimmerman’s uncouthness and the hyper-articulate closing monologue given to Trayvon feels forced. I wish the sense of grief weren’t so all-encompassing — we feel more for the Martin family in their quieter moments.

But I’m not sure any of this really matters. Ballad is an act of community engagement, an opportunity to come together in search of greater understanding. As such, it’s sui generis — and, in a sense, beyond criticism. The palpable reaction of the audience — tears and cheers — speaks for itself.

Martin died four years ago (this year, he would have turned 21). Yet the story is very much part of our present. We see it daily in this crazy, contentious election year. Even stranger, the pertinence of it was brought home just this morning, as Zimmerman was once again in the news. (If you want to know why, Google it — I refuse to give the story any more traction.)

One of the earliest, deepest reasons for theater was to bring people together, and help them ponder the incomprehensible. On this level, The Ballad of Trayvon Martin — flaws and all — shines like a beacon.

The Ballad of Trayvon Martin runs through May 22. For more information, visit the New Freedom Theatre website.