THEATER REVIEW: At EgoPo, The Women Is Served Straight Up with a Twist 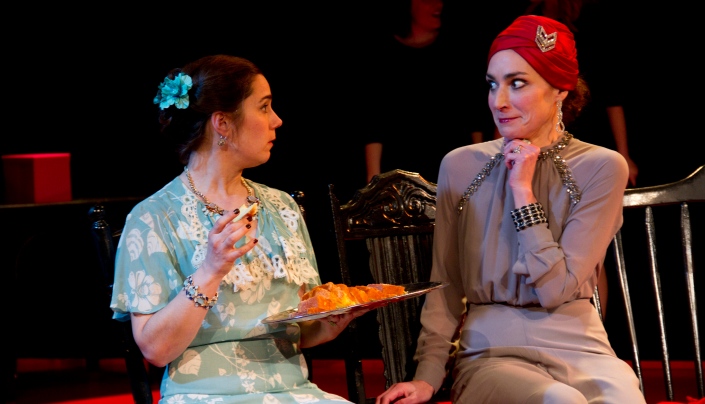 Geneviève Perrier and Mary Lee Bednarek in The Women at EgoPo. (Photo by Dave Sarrafian)

A suggestion for those planning to attend EgoPo’s provocative production of Clare Boothe Luce’s The Women — if you know the 1939 movie, leave your expectations at the door.

That famous film, featuring a handful of America’s greatest comic actresses giving career-defining performances, sets an impossible standard. Made within a few years of the play’s premiere, it also delivers a level of style and New York luxe-ness that’s unimaginable today.

There’s all that to contend with — and a much deeper issue. Can contemporary audiences feel anything but scorn for a handful of wealthy Manhattan wives who have traded their identities, their dignity — their very selves — for a life of spa treatments, shopping at Bergdorf Goodman, and dishy ladies’ lunches?

Ah, but at EgoPo, director Lane Savadove tells us that the problem is less these women than the social world they live in. Lane is one of our most thoughtful and imaginative directors — when he talks, I listen.

What this means in practice is a highly deconstructed version of The Women, one that stems from a powerful (shocking, really) opening image that you’ll be thinking about long after. It’s often visually arresting, always interesting and out-of-the-box, and sometimes revelatory. Whether it ultimately works or not… well, that’s for you to decide.

Melanie Julian in The Women at EgoPo. (Photo by Dave Sarrafian)

At the core of this production are three generations of a family — Mary, the “nice”wife; her wise mother, Mrs. Morehead; and her troubled daughter, Little Mary, just coming into womanhood. For all their issues, these three — in lovely, grounded performances by Melanie Julian, Cheryl Williams, and Courtney Bundens — seem like the only normal people on stage.

But what a snake pit they find themselves immersed in! In a heightened, presentational performance style that sometimes resembles Kabuki, the rest of The Women’s women might make you wish for a stun-gun. They’re shrill, strident, and tough as nails. It’s all intentional, mind you, and there are a handful of terrific performances (in particular, Geneviève Perrier is sensational as the ever-pregnant Edith).

As so often at EgoPo, I felt I was seeing and hearing the play — one I know well — for the first time. Some lines registered as they never had before. (Cynical Nancy, wondering about the sex of Edith’s next child, concludes, “It’s a girl — girls always make you sicker.”) 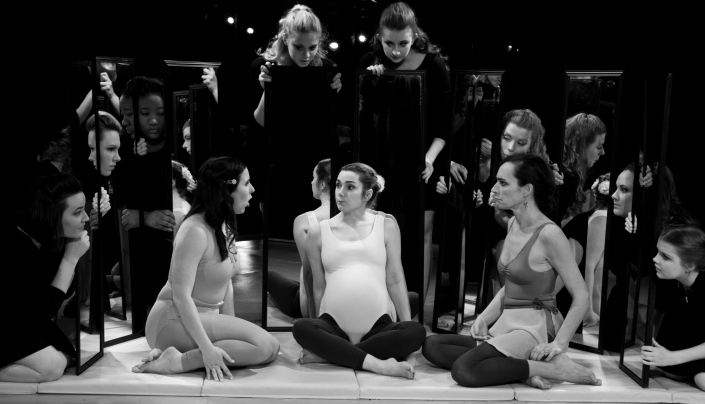 The ensemble in The Women at EgoPo. (Photo by Dave Sarrafian)

What’s missing here is charm. It’s a deliberate choice, but one that has consequences. I’d argue that it’s a necessary element in “problematizing” The Women for its audience — we know we should disapprove, but they’re so damn much fun to be around. Not here, though. On the other hand, the potentially dire consequences of all this frivolity are clearer and darker than ever before.

You may not love EgoPo’s The Women — frankly, I didn’t. But you’ll think about it for a long time afterward. Back to that first image — without revealing too much, I can say that what we see is a child, seemingly sleeping or floating in a sea of white satin. Or is it a casket? Is the image happy dreaming… or a nightmare… or death?

When questions like that arise even before the action starts, you know you’re in masterful hands.