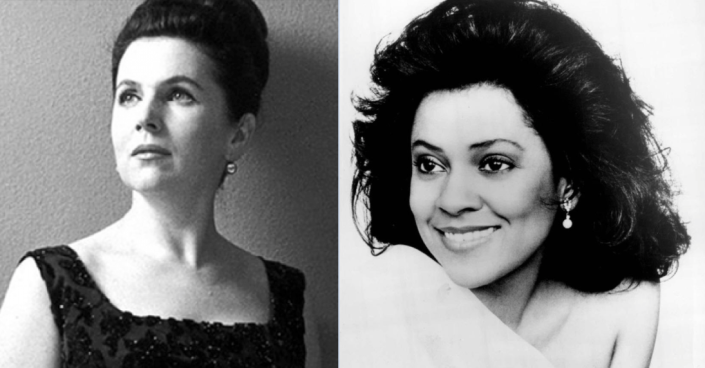 Since my first posting on the final movement of the Mahler 4th Symphony, I’ve had a number of good conversations about the piece in general and several performances in particular; I’ve also found a few more (current total is 81). So I’m revisiting the topic. I hope the collectors among you will play along – what are your favorites? (And of course, the non-collectors can stay away.)  I’ll just add that this will make more sense if you’ve read the first part, which I posted a few days ago (you can link to it here).

** Last time, I quoted Jon Alan Conrad, writing about Irmgard Seefried in his chapter on Hansel und Gretel for the Met Guide to Recorded Opera. In the same essay, Jon makes the point that among Gretels in particular, some sopranos have voices that naturally suggest a youthful, girlish quality, while others sound inherently more adult. A similar point could be made here – you could divide Mahler 4th sopranos among those who, naturally or through modifying their sound, suggest the child persona; and others who are content to bring their best grown-up resources to the assignment. In a sense, the first group seem to embody the poem’s speaker – the second, observers, narrating the story from a distance.

** Speaking of Hansel und Gretel, it hadn’t occurred to me till I started this project how much the Knaben Wunderhorn text is a kind of alternate version of that story – what might have become of them had they not survived the clutches of Rosina Leckermaul! Maybe it’s no accident that so many distinguished singers of both roles show up in the Mahler 4th – Gretels include Judith Blegen (with James Levine), Barbara Bonney (with Riccardo Chailly, and Riccardo Muti), Helen Donath (with Eliahu Inbal), Edita Gruberova (with Giuseppe Sinopoli), and Dawn Upshaw (with Christoph von Dohnány); Hansels include Sena Jurinac (with Karl Rankl), Irmgard Seefried (with Georg Solti and Bruno Walter), Frederica von Stade (with Claudio Abbado), and Ann Murray (with Andrew Litton).

** Among those singers in the “adult group,” are some examples where for me, the sheer beauty of tone is its own reward. Singers in this category include Karina Gauvin (with Nézet-Séguin), Angela Blasi (with Colin Davis), Dorothea Röschmann (with Daniel Harding), and Margaret Marshall (with Jean-Claude Casadesus).

** Among the “childlike” singers, I include Reri Grist (with Leonard Bernstein), Kathleen Battle (with Lorin Maazel), Heidi Grant Murphy (with Andrew Litton) and Sunhae Im (with Manfred Honeck). Of this group, I like Grist best – she’s winningly forthright and has very clear diction – and Battle least (gorgeous voice, but the manner is too self-conscious).

** As I was listening, I found various ways to think about what I was hearing – a kind of necessary logic in organizing these performances. One was the adult/child distinction; another was thinking of the structure of poem and song as divided into three sections. Section I is the opening (“Wir geneissen die himmlischen Freuden”), which sets the stage. Section II (“Johannes das Lämmlein auslasset”) is a faster passage, evoking the specifics of the heavenly menu. Section III (“Kein’ Musik ist ja nicht auf Erden”) is an expression of post-prandial bliss, and the musical line largely restates section I.

** Some singers make points in specific sections. Edith Mathis (with Herbert von Karajan) for example – her singing is technically superb and assured from the start, but it’s oddly faceless – until she comes to life in section III, which has some magical moments.

** Virtually every singer sounds more at ease in section III than in the very similar section I, which leads me to observe that…

** Difficult as this solo is in a studio performance, it must be more so live. The soprano has virtually no time to warm up, and needs to jump in with some of the trickiest phrases in the piece. My roundup includes both live and studio performances, and it was immediately clear that it’s unreasonable to hold the former to the same standards as the latter.

** One of the “collector pleasures” of this project was encountering new singers. A happy surprise is Peggy Smith (with Jean Martinon), previously unknown to me, who turns in a very credible version – as good or better than some of the famous ones. I did a little web searching, and I believe she is Peggy Smith Skarry featured here, in an astonishing performance of Mozart’s Alleluia, done when she was 76 years old, accompanying herself on the piano!

** A singer I wish had performed it is Emma Kirkby – though it’s far outside her usual fare, I think she has exactly the right combination of tone that captures a sense of childlike artlessness, coupled with the musical insight and technical command the piece really needs.

** An irony – the worst performance by far that I’ve heard is from a very great singer – Galina Vishnevskaya (with conductor David Oistrakh). The German is incomprehensible, there’s little sense of phrasing or textual insights, and the tone sounds harsh and unappealing. I doubt I need to point out that in other repertoire – from Britten to Mussorgsky to Verdi – Vishnevskaya is one of the supreme artists of her time.