Sarah Gliko and Ross Beschler in The Hard Problem at Wilma Theater. (Photo by Alexander Iziliaev)

In February 2000, director Blanka Zizka mounted Tom Stoppard’s The Invention of Love at the Wilma Theater in a production that proved to be a game-changer. It was an optimal showcase for Zizka’s spectacular visual imagination – and injected vigor into a play that, in its few previous productions, hadn’t been one of Stoppard’s most acclaimed. The success of The Invention of Love also brought more visibility to the Wilma, already en route to the top tier of American regional theaters.

Now, sixteen years later, we have another Tom Stoppard/Blanka Zizka collaboration on stage at the Wilma. The Hard Problem, here in its American premiere, follows a London production that received mixed reviews.

Does lightning strike again? Yes and no.

Zizka’s directorial panache is evident from the beginning – in a brilliant bit of visual trickery, she transforms the stage into a large, dazzlingly white laboratory, where the actors function almost as specimens in an experiment. It’s a smart distillation of Stoppard’s play, which follows Hilary, a young female scientist, through six years during which she grows from nervous graduate student to experienced professional, and navigates – not always with certainty, and often with mixed feelings – a world where empirical evidence is the most important thing.

That’s not all that The Hard Problem is about, though. Like much of Stoppard, it is a broadly inclusive meditation on any number of Big Ideas. “Do you believe in good?,” the young Hilary asks Spike, her tutor; and later, “What is to be done with the sublime if you’re a materialist?” Since this is Stoppard, the responses to these and other, similar questions are likely to be witty aphorisms rather than answers.

Stoppard’s admirers will find much to like in The Hard Problem, which finds him in good form, and – as always – a master craftsman. I admired the play, though a lot of it is familiar territory that he has handled as well or better before. (Hilary and Spike, for example, seem to be contemporary versions of Arcadia’s Thomasina and Septimus.) 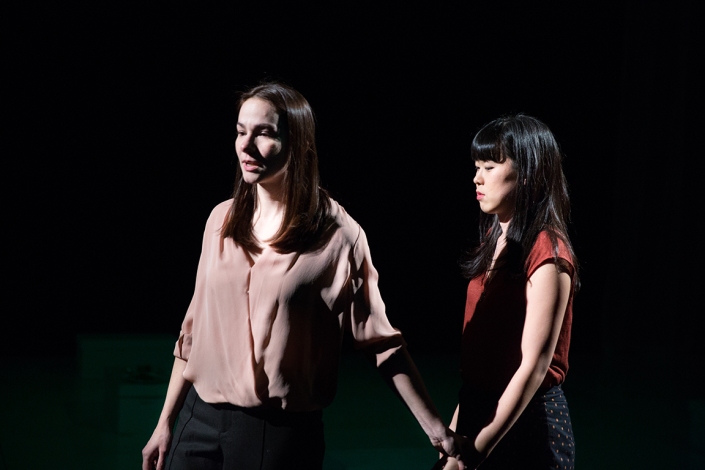 Sarah Gliko and Jeena Yi in The Hard Problem at Wilma Theater. (Photo by Alexander Iziliaev)

Purely on its own, Zizka’s direction and the production design (scenery by Matt Saunders, lights by Thom Weaver, costumes by Vasilija Zivanic) make a sumptuous feast for eye and ear (a strolling saxophonist – Michael Pedicin – provides evocative background music). In a uniformly strong cast, I especially liked Sarah Gliko (Hilary), Jeena Yi (Bo, a disarmingly unfiltered young scientist), and Steven Rishard (Jerry, a Trump-ian billionaire who runs the Kroll Institute, where Hilary and the others work).

Yet there’s something hollow under all the exquisitely manicured whiteness. Much of it is intentional – we’re meant to question the humanity behind the experimentation at Kroll. But in the vast open space here, dialogue scenes come across as practiced orations. We seldom seem to be watching real people in real places having real conversations.

As I understand The Hard Problem, one of its central points is that not everything can be analyzed through research. Many of life’s important issues are understood through a kind of intuition that is fundamentally human.

Ironically, in all the dazzling virtuosity of this show, it’s sometimes precisely that human dimension that gets lost.