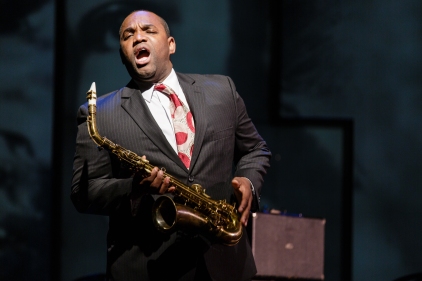 Often when I see a new opera, I wonder about its future. Even some very intriguing contemporary works seem not to have much afterlife beyond their initial productions.

If you can, though, you should see it with Lawrence Brownlee playing the legendary jazz saxophonist. The work was written for him, and his supple, elegant lyric tenor is one of the loveliest sounds to be heard in opera today.

Brownlee is at his absolute vocal best here, and composer Daniel Schnyder has given him a role that showcases everything he can do, from arching legato lines to be-bop scat that calls for virtuoso coloratura. In the last few minutes of Yardbird, Brownlee sings an upward run into head voice that, on opening night, brought a collective gasp from the audience.

Good as he is, Brownlee isn’t the only reason to see Charlie Parker’s Yardbird.

For starters, there’s Schnyder’s score. The first impression is of sleek, ‘50s symphonic jazz – I thought in particular of some of Elmer Bernstein’s great, Noir-ish film scores. But the language and forms are more complex than that, and regularly cross over into something recognizably classical. The masterful chamber orchestration (16 instruments) is full of color. Conductor Corrado Rovaris and the orchestra are superb.

Charlie Parker’s Yardbird is through composed, with a sense of cohesive musical fabric – yet it’s also what used to be called a “numbers opera,” with individual arias and ensembles clearly defined. Even in conversational mode, Schnyder’s writing flatters voices.

Much of the story here is told through Parker’s inner circle, especially the women in his life. They include his patron, Baroness Nica de Koenigswater (the vocally and physically glamorous mezzo, Tamara Mumford), and wives Rebecca, Doris, and Chan (sung by three estimable sopranos: Chrystal Williams, Angela Morellaro, and Rachel Sterrenberg). Parker’s mother, Addie, figures very prominently – embodied here with tremendous vocal and physical presence by the marvelous Angela Brown, whose big solo brings down the house. (With Brown’s blazingly powerful chest-register, somebody should cast her as Bessie Smith!) There’s also a good role for Parker’s friend and fellow jazz great, Dizzy Gillespie (baritone Will Liverman, who had the clearest diction in the cast). 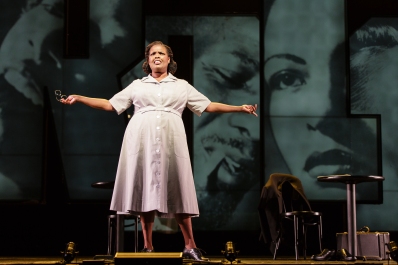 There are some captivating poetic flights also in Bridgette Wimberly’s libretto, but on the whole, I found her rather impressionistic take on Parker’s story – essentially set as a fantasy night where he is visited by apparitions from his past – not always easy to follow. (If you plan to see it, it will help to do a little reading about Parker.) Sometimes, both lyrics and music felt repetitious, and – even at 90 minutes – overlong. Yet, Charlie Parker’s Yardbird grows in stature over the evening, with the best of it in the last section – in addition to the gorgeous final moments for Parker, and the solo for Addie, there’s a terrific final ensemble featuring the women, and a touching visual tableau (the show is elegantly directed by Ron Daniels, and designed by Riccardo Hernandez, Emily Rebholz, and Scott Zielinski).

One area where Wimberly’s libretto is very strong is in capturing Parker himself. He emerges as thoughtful, creative, caring – but gripped by many demons, including the multiple addictions that brought his life to a tragically early end at age 34. Though Brownlee makes a sincere effort to get into the character, it remains at arm’s length. His natural likeability isn’t an ideal fit, and even the glowing health of his vocal instrument is a constant reminder of the distance between performer and character.

What this really means is that there’s room for Brownlee – and this work – to grow, and I have every sense that it will. For now, let’s rejoice in the achievement of Opera Philadelphia. To premiere a work of this stature is the latest reminder of our home company’s continuing ascendance. 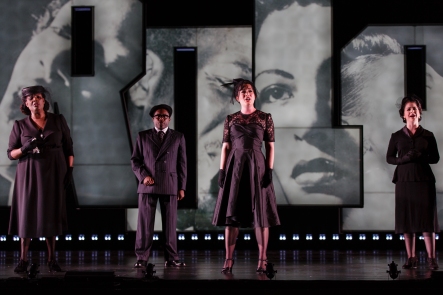