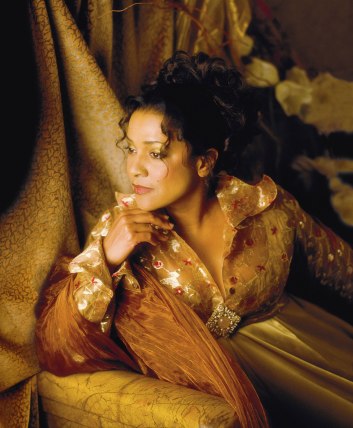 Make no mistake about it: A performance by Kathleen Battle is An Event. Anyone interested in hearing great music – and experiencing a true diva – should go at least once.

In the 1980s, Battle became one of opera’s top-ranking stars. She brought to the party a graceful, natural musicality, and an exceptionally lovely lyric soprano – silky and luxurious throughout its range, with (rare for this voice type) an instantly identifiable timbre.   It didn’t hurt that she was beautiful, and impeccably turned-out – a veritable couture goddess. I frequently use her filmed Magic Flute from the Met for teaching purposes, and it never fails that besotted students ask about her ravishing Pamina – “who is that?”

I saw a lot of Battle in those years, in opera but more often as a recitalist. I would say the gowns alone were worth the price of admission, but that’s only part of it – what brought me back was the singing, always a treat across a very wide repertoire. A Battle recital was likely to begin with early music, and end with a selection of spirituals that were always greatly anticipated by her devoted followers.

In 1993, Battle parted company with the Met. In the years since, she has moved away from opera and appeared in concert – and, it would seem, only when she wants to. I’m sure this has been frustrating for her many fans, but in a way it’s only added to her mystique – a Kathleen Battle appearance, now more than ever, is An Event, rare and precious. (I’m also not sure how many more we can expect. Though it may be ungallant to point it out – and you certainly won’t know it to watch her – she’s now in her mid-60s.)

On October 24th, Philadelphians will have another chance to experience the Battle magic, in a concert called “Underground Railroad: A Spiritual Journey.” If you’ve never seen Battle, now is your chance – and if you have, you’ll want to go back.