Thoughts on Death of a Salesman — and EgoPo’s Production 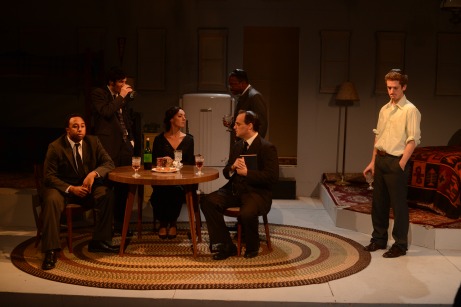 This will seem an odd admission for a theatre critic, but here goes: I’ve never been entirely convinced by Death of a Salesman.

Oh, I’ve tried. Growing up, I was regularly reminded that Salesman was (no doubt, still is) considered a monumental American masterpiece. The ubiquity of this opinion got my contrarian impulses going – for example, giggling in class at Miller’s awkward attempts at poetry (“Nobody dast blame this man,” or the very name “Loman”), for which I was sternly reprimanded. I also sniffed at the play’s over-obviousness. In a typical example, it’s not enough that the Salesman deals with the metaphor of the American Dream; we must have a literal “American Dream” in the form of Willy’s fantasies about brother Ben’s trip to Alaska.

Looking back, some of my reaction was juvenile snarkiness over relatively minor details. But my antipathy to the play ran deeper, though it would take me decades and multiple exposures to understand it.

Today, though, I’m clearer about what turned me off about Salesman. It’s the sense that Willy and his family had so little resonance for me – specifically, the world of Miller’s play is unrelentingly heterosexual, one where the very existence of a gay person would be as alien as finding a Martian peddling insurance door-to-door.

Has any director or production attempted to excavate a gay subtext in Salesman? Not that I’ve seen, and I think it would be tough. I suppose Biff’s obsessions – football; an idealized, fantasy Western paradise where a man can grow and breathe – might be seen as overcompensation.   Likewise Happy’s casual (degrading, really) treatment of women.

The trouble is I don’t think Miller sees it this way. He seems genuinely intoxicated by at least some of the machismo. Every male character in Salesman has a wife, or girlfriends, or whores (or all three). Even nerdy, “not well liked” Bernard is married with kids – Miller makes sure we know that.

And what of those female characters? Salesman is especially tough on them, starting with devoted, loving Linda, who most of the time is portrayed as desexualized and drab, practically a walking housedress. (If there’s a more nuanced spectrum of women than flirts and mother-wives, I don’t think Miller’s found it.)

It bothers me especially  because a case is regularly made for Salesman’s universality. The playwright himself led the charge – always fond of trumpeting his own greatness, Miller wrote a much promoted and republished essay, Tragedy and the Common Man, where he places himself alongside Aeschylus and Shakespeare, as he positions Willy as Everyman.  Tragedy and the Common Man irked me even more than the play itself.

For all these reasons, the most welcome aspect of EgoPo’s probing, sometimes visionary Death of a Salesman is the deliberate avoidance of “universality.”

This isn’t the first time I’ve seen a “Jewish Willy Loman” – Dustin Hoffman’s portrayal certainly suggested that. But here, the family life and milieu feels specific. Ed Swidey’s Willy is a physically towering presence (in that sense, recalling the original Lee J. Cobb), but also a bearded, almost rabbinical one. Swidey – jittery from the start, but also at times frighteningly still – is often spellbinding. Mary Lee Bednarek, a vigorous and fierce Linda, is equally intriguing, and perhaps even more of a mold-breaker – for the first time, I saw Linda as sexual being. Together, they make the welcome point that Willy and Linda aren’t abstractions – they’re living, breathing, needy, troubled individuals.

Savadove has other brave ideas. He emphasizes the expressionist aspects of the script. This, too, isn’t wholly new – Jo Mielziner’s original scenery is famous in part because it deviates from realism, and I recall Robert Falls’ Broadway production (with Brian Dennehy) incorporating expressionistic elements.

But Savadove goes further. On the small stage, the Loman home (and environs) becomes a kind of dollhouse, where the action seems to take place in a mental space rather than specific rooms. Several actors take on multiple roles, sometimes necessarily switching mid-scene – again, this seems to reflect Willy’s hazy memory of events, rather than what actually occurred. Wrapping the stage is wall of windows, which reflects the best aspects of Savadove’s production – it is simultaneously realistic (in this case, the Brooklyn tenement apartments that impose on the Loman home) and the impressionistic fantasy world of Willy’s imagination.

Not all of Savadove’s innovations work quite so seamlessly. Some of the double-casting is confusing, and in general I think the first act is stronger than the second. But some of the daring ideas that I rejected initially I now think are fascinating – for example, having Charley and Bernard played by African American actors. Would the Loman’s likely have had (and socialized with) Black neighbors? Maybe not, but it makes us ponder – as surely Willy himself does – about the ever-shifting terrain of American social power.

I think EgoPo’s production deserves to be seen by anyone interested in canonical drama – and how it can be reinvigorated in production. And I’m personally grateful for the opportunity to question my own preconceptions about Death of a Salesman.

Death of a Salesman, EgoPo Classic Theater at the Latvian Society, through November 9th. www.egopo.org