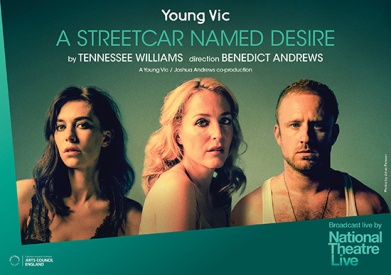 In the summer of 1974, I saw A Streetcar Named Desire in London, starring Claire Bloom and Martin Shaw, and directed by Edwin Sherin. Previously, I’d read the play and seen the movie – I’m not sure my teenage mind really grasped it, but I understood that here was something profound about human instincts. I also knew enough that I wasn’t impressed by the famously misguided Los Angeles Streetcar production I had seen the year before, which – despite some famous names, including Faye Dunaway and Jon Voight – failed to ignite.

But I didn’t know just how much I’d missed until I saw Bloom and company in a production that was a revelation to me then – and still remains my gold standard for Streetcar in the theatre.   It’s not only that everybody seemed to belong to the same world (they did), which itself was both poetic and believable (it was). What astonished me most was how Bloom, in a performance of overpowering emotional conviction, managed to give Blanche – against all odds – a sense of dignity. I can still see her final exit – a slow and steady walk, head held high. 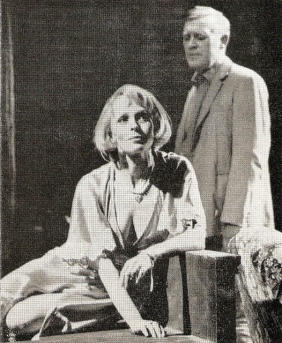 Claire Bloom and Joss Ackland in A Streetcar Named Desire

There is little in the way of dignity in Benedict Andrews’ revival at London’s New Vic, which I saw by way of the National Theatre Live telecast. Blanche (Gillian Anderson, in an accomplished but unmoving performance), trembling with what looks like the DTs, enters wearing sunglasses. (The script tells us it’s evening, not that you’d know from the scenography here.) Late in the play, she smears lipstick over the lower half of her face. (Aficionados of camp will instantly recall Bette Davis as Rosa Moline in Beyond the Forest.)

In between, Anderson is flirty but also hard-edged and without any lyricism.  She can get a laugh describing Stanley as a “survivor of the stone age” – but the tenderness with which Blanche recalls high school kids experiencing first love goes largely unmarked.

This is Streetcar at its most tawdry, the characters looking like refugees from a David Rabe play. No, not even – my first glimpse of the DuBois sisters made me think of the kind of prostitutes regularly seen on Law & Order to provide a sense of milieu.

Consider Stella (Vanessa Kirby, who clearly commits herself fully to Andrews’ vision). She’s airy and casual, prone to bursts of tears and shrieks, but also seemingly very comfortable with sex. When she comments that she “was – sort of thrilled” watching Stanley smash all the light bulbs in their bedroom, she seems to take it in a stride. (Compare the wonderment of Kim Hunter in the film, where this moment encapsulates genuine self-discovery.)

Kirby is also absolutely, utterly contemporary, which brings us to another of Andrews’ rethinkings – his Streetcar takes place today.   This keeps bumping against logic in a myriad of details – sending urgent messages by telegram, listening to Xavier Cugat(!) on the radio, etc. (Though I noticed that in Andrews’ production, the text is rewritten so the price of Blanche’s perfume has gone up – from Williams’ $25 dollars an ounce to $250.)

But these are minor issues. The updating really breaks down in much more significant ways. Streetcar takes place shortly after World War II. When Stella believes that Stanley, a former a serviceman who now travels on business, is a go-getter bound for greatness, she’s expressing a commonly shared, American postwar optimism. Equally important, I think, is that the play is set less than 100 years after the Civil War, in a South where true reconstruction and economic solidity were still a long way off.

In any event, it would be hard enough to believe that Ben Foster’s Stanley had significant promise even in the postwar boom. To imagine him making the grade today is delusional. Foster has some good quiet moments – when he overhears Blanche describing him dismissively, there’s a touching sense of surprise and pain. But most of the time, he registers as the kind of bluecollar shlub found in countless recent sitcoms.

I presume this downgrading of Stanley is, like the contemporary setting, part of Andrews’ master plan – to emphasize the timelessness (timeliness?) of Streetcar, and perhaps also to suggest that the combat lurking underneath sexual attraction is more common than we imagine. I’ll give him that there are some powerful, visceral moments – seeing Stella bleeding after Stanley pushes her, for example. I’m also willing to believe that the production is more effective in the theatre, where the changing perspectives provided by a rotating stage are more visible.

The flow between scenes must also work better live – here, close-ups of quick on-stage costume changes looked awkward, but I was intrigued by something I probably wouldn’t have noticed in the theatre. Characters wear underwear throughout, no matter what else they have on – so beneath Stanley’s red pajamas, he sports modest boxer briefs. Could it be that for all Andrews’ desire (sorry) to present an unblinkingly sexual Streetcar, there’s a level of prudery he can’t overcome?