You Can’t Take It With You on Broadway, and Thoughts on American Comedy

Kristine Nielsen, Rose Byrne, Annaleigh Ashford, and James Earl Jones in You Can’t Take It With You.

Growing up in a theatre family – a Jewish theatre family – I accepted on faith that George S. Kaufman and Moss Hart (especially their collaborations, but also the works they wrote individually and with others) were the gold standard of American comedy.

It’s a family legacy I’ve carried with me, but with one problem – the Kaufman and Hart plays I’ve actually seen almost never seemed to click for me. There have been a number over the years – Once in a Lifetime, Light Up the Sky, Dinner at Eight, and more. I wanted to love them, truly I did – but mostly I just winced at the snail’s-pace exposition, and the lame, protracted jokes. (Of course, period references that went over my head didn’t help.)

Twice in my experience, I’ve been convinced. Once was last weekend, with the current Broadway revival of You Can’t Take It With You, which mostly won me over (more below). The other was a 1976 revival of The Royal Family, a play rich with the kind of theatrical lore I was really beginning to love. Also, it was my only live experience of the great Eva Le Gallienne, whose performance thrilled me so much I went back the following night.

Thinking about it now, I see that You Can’t Take It With You and The Royal Family are not only comedies – there’s something deeply sentimental at the core. Perhaps that’s why they’ve worn better than some of Kaufman and Hart’s other, more brittle plays?

Still, after years of reading and watching (and sometimes teaching) this canon, I’ve come to feel they are among the hardest works to get right in performance. The major problems, I think, are twofold. The writing itself, with its slow development and gentle-chuckle humor, no longer seems funny or inventive; and the acting calls for stylistic mastery of long-gone idioms and character types.

The current Broadway You Can’t Take It With You pretty much solves the first problem. Judicious cutting helps, and director Scott Ellis (who makes a specialty of comedy from this era, though I’ve found his previous work uneven) keeps up the pace and energy, and fills the stage with people and things to look at.  The audience seems to love it.

As for the acting, it, too, coheres better than I expected. James Earl Jones remains a major presence at age 83, the voice and stature very much intact (if it’s possible to have twinkling gravitas, he’s got it). Occasionally he seems slow on the uptake, but mostly he’s a touching, sly Grandpa and – as he should be – is the anchor of the show.

In the more broadly comic roles, there’s delightfully daft work by Kristine Nielsen (Penny), Julie Halston (Gay Wellington), Reg Rogers (Kolenkhov) and especially Annaleigh Ashford (Essie). Ashford, in particular, is a model of finding something in a role that looks fairly flat on the page – she comes close to overdoing it, but never quite does. (Halston, on the other hand, overdoes it exactly as you hope she would.) Only Elizabeth Ashley disappoints – as the Countess Olga, she poses elegantly, but fails to find either the rueful humor or touching strength at the character’s core.) 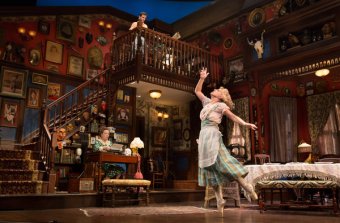 Playing the (as it were) straight men and women, Byron Jennings (Mr. Kirby) and Mark Linn-Baker (Paul) are especially good. As Alice, the daughter who seeks acceptance in a more conservative family, Rose Byrne makes a game effort to be something more than a stock ingenue – often she succeeds, and she’s pretty and likable, but in this stage-savvy company, she doesn’t register with distinction (and her voice sounds thin).

Still, as skillful as they are, one is always aware that these are actors playing roles. I’ll have to watch the famous movie again, but my memory is that the cast – admittedly, an irreplaceable, blue-chip ensemble – do as much or more with far less visible effort. They seem to embody the characters, rather than impersonate them. This is particular notable watching the great Jean Arthur as Alice – again, it’s not a role that looks like much in the script; in fact, her hunger for convention is off-putting. But Arthur brings something unique, luminous and genuine to every moment on-screen – we can’t help falling in love with her.

Lionel Barrymore, James Stewart, Jean Arthur, and Edward Arnold in the film of You Can’t Take It With You.

Maybe that’s what is so difficult to capture now in these 1930s comedies – the sense that underneath it all, there’s something real. In a way, the depiction of the Vanderhof family home serves as a metaphor. David Rockwell’s set for the Broadway production is an extravagantly decorated living room – part Addams Family, part jumble sale – that gets laughs and applause from the audience. The house in the movie just looks like a big place where people live.