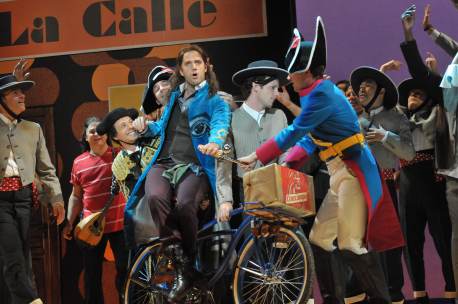 In 1816, Rossini’s Il Barbiere di Siviglia survived a disastrous premiere to become one of the most beloved works in the repertoire – as close to a guaranteed crowd-pleaser as exists in opera. Yet it’s not easy to pull off.

For starters, it requires virtuoso singers in the leading roles whose technical mastery must be complete. Dramatically, too, it’s tricky. Barbiere is a comedy – certainly less complex and ambiguous than Marriage of Figaro, the second play that follows it in the great Beaumarchais trilogy. But if Barbiere is treated too much as an antic farce, it risks losing the heart and soul of the show.

Opera Philadelphia’s bright, bubbly Barbiere gets off to a great start. Conductor Corrado Rovaris’ beautifully sculpted overture not only sets the right tone musically, it embodies exactly what’s needed to make the work come to life as a piece of theatre – a fast pace and propulsive sense of rhythm, but also arching lyricism, and an artful balance of light and shade.

What follows is always enjoyable and full of panache, without consistently living up to this very high standard. Director Michael Shell and his design team give us a Barbiere that pays homage to the great films of Pedro Almadóvar. Saturated colors and knockout ‘60s-style designs abound – Figaro’s frock coat is the lone holdover of the play’s original 18th Century context. (I’m not always a fan of updated productions, but invoking Almadóvar here is mostly apt, not least in that it retains the Spanish setting.)

Shell has similarly bold ideas about rethinking the characters, some of which I like a lot. It’s delightful to see Rosina as a working girl, even if it doesn’t quite suit the plot. Berta the housemaid here is transformed into a sexy matron, more interesting than the traditional drudge. On the other hand, whatever Don Bartolo is meant to be doing makes little sense – baritone Kevin Burdette, vocally and physically nimble, delivers a grab bag of gimmicks rather than a character.

The biggest problem here is that the show is overbusy. It’s exhilirating to see the stage filled with assembled masses – flamenco dancers, police, mariachi musicians, nuns, you name it. But too often, the crowds draw focus from the main action. Individual characters and their stories get lost.

Principal singers here – a gifted and very attractive crew – have similar peaks and valleys. As Almaviva, tenor Taylor Stayton shows comic gifts and a superbly trained lyric tenor. He may be the only Almaviva I’ve heard who scores most strongly in his dazzlingly ornate final aria. In slower music, where we want an exquisite, honeyed play of color and line, Stayton delivers something more prosaic. Jennifer Holloway (Rosina) has an exceptionally fine voice – round, warm, even throughout her considerable range, a true mezzo with a brilliant upper register. But her phrasing tends to be choppy. Jonathan Beyer has a more ordinary vocal instrument, but it’s deployed very stylishly, and is a suitable sound for Figaro, whose writing emphasizes comic banter over legato. He also has a fine stage presence. His likable, boyish characterization should include more slyness, as well as a greater sense of purpose – Figaro’s machinations are in the service of true love, after all.

In the end, this is an entertaining Barbiere that realizes much of the comic potential, and delivers musically on a high level. I wish it gave us the human dimension of the drama with equal skill, but that’s for another time.