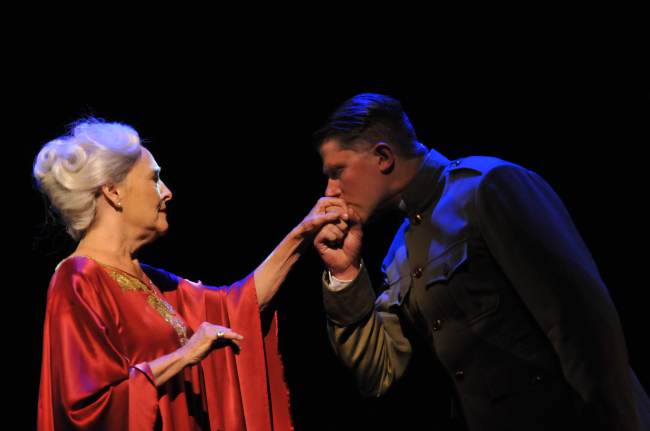 I heard Frederica Von Stade 40 years ago, and it was love at first sound.  This was the summer following my high school graduation, and I was rewarding myself with non-stop immersion into concerts and theater performances.  Much of that period in my life is now a pleasant blur, but I’ve never forgotten the thrill of Flicka (as she’s pretty much universally known) singing Mozart at the Hollywood Bowl.  It took only a few notes to know I was in the presence of something very special.

Aural love affairs, like all others, evolve over time.  Ours (well, I guess it’s really mine) has mostly grown with time.  I’ve been fortunate to hear her in opera (as Cherubino in Nozze di Figaro, and Octavian in Rosenkavalier, two signature roles) and concerts.  My initial admiration has only grown.

So it was an emotional moment to encounter Flicka again – for what may be the final time I’ll hear her perform – in A Coffin in Egypt, a new musical theater work written for her by Ricky Ian Gordon.

Gordon and librettist Leonard Foglia have based the piece on a short play by Horton Foote, about a 90-year-old widow from Texas who recalls her younger life.  While the play is virtually a monologue, they have opened it up a bit – there’s a gospel quartet that frames the action – but it’s still very centrally Von Stade’s show.  Gordon’s gentle, accessible score captures the bittersweet nostalgia at the core of Foote’s writing, but more variety – and more specific pairing of the music and words – would be welcome.  There are bolder undercurrents in the drama as well as opportunities for comedy that go unrealized.

But in a sense, none of this really matters.  What Gordon absolutely knows is what works for Von Stade’s voice at this point in her career, and he’s tailored the role to her with the mastery of a Balenciaga or Dior.  Flicka just turned 69.  I’m not being ungallant – she’s very open about her age – and few singers at this stage would (or should) consider a substantial leading role.

Yet Von Stade really triumphs in it.  And it’s astonishing how much voice she still has!  The sound remains beautiful (with a color that is distinctively her own), and the sense of musical shape and phrasing is as strong as ever.

Coffin also stretches her.  There are substantial passages of spoken dialogue, which she delivers with confidence and insight.  After the performance, I talked with two very savvy acting teacher friends, and both had high praise for her.

In all, a very memorable evening, especially for the exceptional grace with which Von Stade is nearing the twilight of her career.

Or maybe it’s not the twilight at all.  I’m not sure that Coffin will have a life after Flicka, but Flicka could certainly have a performing life after Coffin.  With her acting skills and still very robust lower vocal range, she could easily continue in musical theater and dramatic character roles.

Maybe in 40 years, I’ll once again be applauding her in some new project.  Here’s hoping, anyway.

At the Perelman Theater, Kimmel Center.  Remaining performances on 13 and 15 June.  Ticket information at operaphila.org