REVIEW: At the Pennsylvania Shakespeare Festival, the Poetic Richard II is made Prosaic 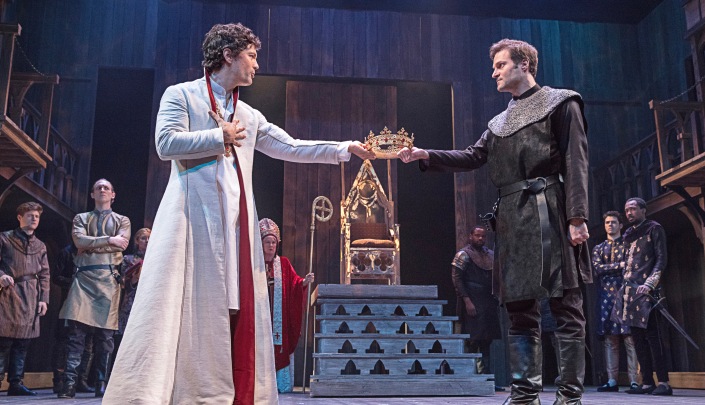 It’s a myth that lightning can’t strike the same place twice, but it proves true for a pair of Pennsylvania Shakespeare Festival repertory productions. Shakespeare in Love, which opened last week, is a high-energy delight with tons of popular appeal. Now comes Richard II, a tougher sell by any standard.

It’s a talky play for sure; also, one with potentially fascinating, complex ambiguities. Here, despite the good ensemble cast who shone so brightly in SIL—and a similarly handsome production—Richard II is dramatically inert.

It begins well, with a bolt of lightning—a snappy theatrical touch that throws the theater briefly into murky darkness. Immediately following, a sound collage suggests overlapping news reports. The effect is disorienting and intriguing, readying us for a production that will layer contemporary and historical ideas. That’s certainly apt for Richard II, which has many resonances. (Briefly: Richard, a flawed, capricious leader, is deposed by Bolingbroke, who will become Henry IV. It’s seen as a major step up for English history, but neither the men nor the monarchy emerges unscathed.)

Yet modern touches in director Gina Lamparella’s production prove only fleeting, as when we see Richard practicing his golf swing (a dig at Trump?) with a cadre of foppish friends, who collectively look like Sgt. Pepper’s Lonely Hearts Club Band. Some scenes are rushed; a few others are played for humor, not always effectively. For the most part, though, this feels like pageant Shakespeare.

More critically, neither of the two central performances registers as fully dimensional. Justin Adams’ businesslike, matter-of-fact Henry IV seems oblivious to his many compromises; it comes as a surprise when he announces he will go to Jerusalem in an act of atonement. Christian Coulson is a petulant Richard, whose maddening contradictions—there are indeed things to admire about the character—are flattened into generalized, preening smugness. (“Preening” is often a code-word for effeminate. There’s a tradition to playing Richard as gay, but it’s very problematic when it suggests—as it does here—that his sexual orientation is his primary source of weakness.)

There’s able support by Christopher Patrick Mullen, Starla Benford, Brandon J. Pierce and others. But the net effect of Lamparella’s production is to make one of Shakespeare’s most poetic plays prosaic.

It’s a missed opportunity since Richard II has many eerie parallels to our current troubles. One passage struck me yesterday: John of Gaunt’s “Scepter’d Isle” monologue, a nostalgic paean to his beloved homeland. It’s often a crowd-pleaser, full of gorgeous imagery; at the same time, there’s a sinister undercurrent in the mawkish nostalgia, excessive surely even in Shakespeare’s time (the speech runs 29 lines). Midway through, John salutes England as:

This precious stone set in the silver sea,
Which serves it in the office of a wall,
Or as a moat defensive to a house,
Against the envy of less happier lands

Reading it, I felt chills. Watching last night, it passed with little effect, a symptom of the general lack of gravitas. Another was the crown itself, which is featured in several scenes. At one point, Richard and Henry grasp it from opposite sides in a standoff; at another, Richard removes it from his head and, rather shockingly, sets on the floor. Each time, it was treated as a prop, put on and taken off as effortlessly as a baseball cap.

The crown may be hollow; but here, literally and metaphorically, it seems weightless.