REVIEW: More Flash than Substance in Broadway’s The Iceman Cometh 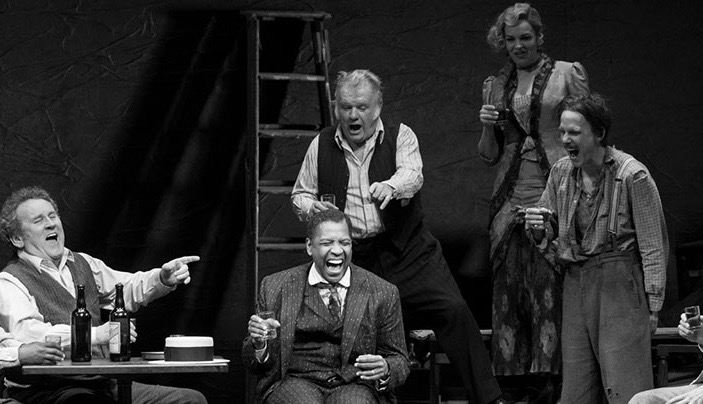 Watching George C. Wolfe’s uneven production of The Iceman Cometh, I had a vision of the last time I saw the play—20 years ago, when Howard Davies’ much-heralded version from the Old Vic brought Kevin Spacey back to Broadway. (Remember when that seemed like a good thing?)

But it wasn’t Spacey I was thinking of. It was Katie Finneran playing Cora, one of three female characters, all prostitutes. She was loading on the schtick, including a vaudeville New York accent. For a moment, Davies’ somber Iceman looked like Guys and Dolls.

It was a brief but telling lapse in what was more often a good production. It’s also fair to point out that O’Neill himself wrote in the dialects, and that there is quite a bit of dark comedy in Iceman, notably at the expense of women. (More on that later). But the miscalculated shift in tone did some damage, breaking the spell of the play’s more thoughtful moments.

In Wolfe’s production, there’s not much of a spell to break, though the opening image is promising: a row of chairs placed far downstage, each containing a sprawled, sleeping drunk seen in moody half-light. I wondered for a moment if might this be the expressionistic Iceman I’ve hoped for.

Alas, mostly no, though elements of expressionism return in the final act, with the bar denizens seated in the shadows in a kind of circular orbit, observing Hickey—Iceman’s antihero—as if they were the dead in Our Town.

The beginning and end of Wolfe’s Iceman, where his take is most abstract, are its best directed scenes. Beyond that, he vacillates between naturalism and symbolism. Significant emphasis is placed on the imagery, including one of the show’s real strengths—everybody looks ideal. With their interestingly weatherbeaten faces, disarrayed hair, and tattered outfits (the latter in improbably coordinated earth tones), these barflies might have stepped out of a Walker Evans or Dorothea Lange photograph. 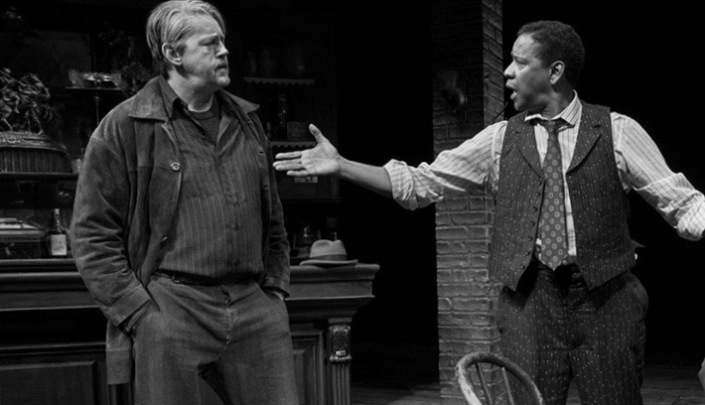 But far too much is undercut by the glib, razzmatazz delivery. I thought Davies’ veered too much into musical comedy excess with this portrayal of Iceman’s women, but Wolfe takes an even more extreme approach, and applies it across the board. The action and performances here are cranked up and over-energized, including Denzel Washington’s Hickey. Entering through the theater aisle, jumping and dancing to wild audience acclaim, you expect him to burst into “Shipoopi.”

Hickey should be a galvanizing force—everybody in the bar describes him so. But it’s meant as a stark contrast with the others, who are hanging on by a thread. The greatness of Iceman is in its tiny character studies of lost souls. They need a sense of intimacy to flower; here, they’re delivered with a high-wattage professionalism that essentially drains them of poetry. It’s also hard to believe that most of these hale-and-hearty guys would be unable to hold down a job.

Wolfe’s ensemble of distinguished actors is disadvantaged from the start by his direction. Michael Potts (Joe Mott) and David Morse (Larry Slade) fare best. Potts navigates the line between charm and anger with hair-raising precision; Morse summons a commanding sense of presence while still suggesting bone-deep weariness. Neal Huff (Willie Oban) has some terrific moments, and Tammy Blanchard (Cora) is lovely in her quieter scenes, though she too is saddled with a lot of vulgar schtick.

Colm Meaney is a good fit for Harry Hope. But in Wolfe’s hands, Harry’s big scene where he attempts to leave the bar for the first time in many years—it to be heartbreaking—is played for comedy. Reg Rogers (Jimmy Tomorrow) and Frank Wood (Cecil Lewis) similarly are undone by playing the humor too broadly, and in addition, Wood is unintelligible much of the time. Bill Irwin (Ed Mosher) is awful, frankly, recycling the clownish business he’s famous for in a context that calls for something very different. 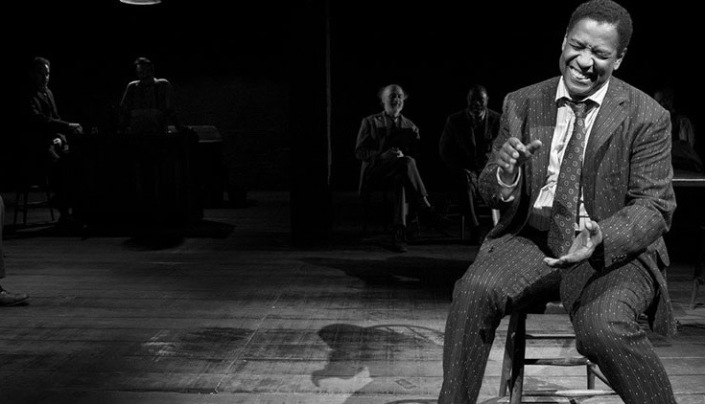 Washington is, of course, this Iceman’s drawing card, and Wolfe never lets us forget it. Critic Sara Holdren in her review for Vulture rightly criticized the front-and-center placement of Hickey’s monologue, though it’s only the most egregious example of a pattern where everybody’s “moment” is pushed far downstage.

For Washington’s sake, I wish his Hickey was treated less as a star turn. He’s a powerful stage actor who doesn’t need any help, and on his own terms, his conception of the role, full of nervous smiles and flashy glad-handing bonhomie, is intriguingly unsettling. If his final confession feels less soul-wracking than I’ve seen from past Hickeys, that’s a grim but not unsupportable interpretive choice. Despite Hickey’s verbose confession, there’s ample room to believe he hasn’t really internalized any sense of guilt.

Other than that, Mrs. Lincoln, how was the play? Because whatever the peaks and valleys of Wolfe’s production, the overwhelming takeaway is that Iceman Cometh, once thought a problematic but great work, is now untenable. No audience should be asked to spend four hours watching drunken men wallow in their misery, while the misery they inflict on women is marginalized except as a fulcrum for the plot. Even the title turns out to be an ugly joke—the mythic “iceman” is a punchline, the alleged paramour with whom women cheat.

One particular disappointment is that Wolfe’s abstract staging of the final minutes could have allowed him a chance to rethink the male/female balance. Cora is one of the characters on stage during Hickey’s monologue. Seen here, she’s seated among the observers, and we’re very much aware of her listening.

Three times, Cora interrupts Hickey. First is a comment about his bad jokes; second, a reference to the venereal disease he gave his wife, Evelyn; and finally, simply: “Jees, Hickey… Jees.” Each of these is an opportunity to give voice to the female perspective—to allow Cora to challenge Hickey, rather than simply respond to him. But as directed here, Blanchard’s Cora does nothing with these interchanges. They are barely heard from the sidelines.

Instead of convincing us that this 80-year-old play still has something vital to offer, Wolfe’s production confirms the opposite. It’s time we put Iceman on ice.