REVIEW: In Three Tall Women, One Towers Above the Others 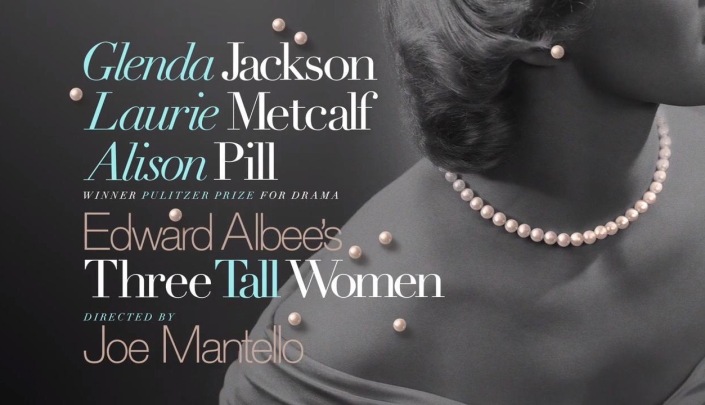 The play’s title and the show’s billing suggest equal status, but in Joe Mantello’s production of Three Tall Women, it doesn’t quite work out that way. Two of the actresses are excellent. Alison Pill (playing C, the youngest tall woman) gives a slyly nuanced performance that has been underappreciated by many critics. Laurie Metcalf (B, the middle-aged one) is not nuanced, but working in her signature bold strokes style, she is vivid. Metcalf won the Tony for Best Featured Actress in a Play.

Still, it’s Glenda Jackson (as A, the oldest) who towers above the others. Returning to Broadway after a three-decade absence, the 82-year-old actress gives the most galvanizing performance in recent memory. Mixing hauteur, ferocity, elegance, and raucous, mean-spirited wit, Jackson commands the stage from her first line with luminous intelligence and an iron-clad technique. Audiences adore her, and small wonder. She was universally regarded as a shoo-in for this year’s leading actress Tony…and of course, she won.

How marvelous for Jackson to come back in triumph—and to have this opportunity to correct a previous unhappy experience in an Albee play. She hasn’t pulled her punches about the 1989 Los Angeles production of Who’s Afraid of Virginia Woolf?, where she played Martha under the author’s own direction. It sounds like a miserable situation across the board. I saw the show, and indeed Albee’s plodding literalism pretty much sank the ship.

Her Three Tall Women director takes a very different approach. While scrupulously observing the author’s detailed stage directions—god forbid Albee should leave room for directors and actors to contribute—Mantello imbues the play with a sense of flow and life-force that is quite different from how I imagined it. Like so much Albee, Three Tall Women floats somewhere between realism and abstraction. Mantello makes it one thing I never expected it could be: fun.

But then, I’d not seen the play before, though I had read it a number of times. From the text, one is particularly struck by the identity of the women—or more precisely, the lack of identity.

Take a look at a page from the script:

As you see, the three females are unnamed, merely assigned a letter. This facilitates the play’s big coup-de-théâtre—not a spoiler, since Albee puts it out there early on: A, B, and C will turn out to be aspects of the same woman.

Beyond that, the lack of names and detailed characteristics gives Three Tall Women a fascinating ambiguity. To read it is to be beguiled, but also vexed in trying to figure out exactly who it is who’s speaking. In this sense, Three Tall Women, a late-career play, feels linked to Albee’s absurdist roots.

Mantello, one of the smartest directors around, clearly recognizes the multiple planes of Albee’s play. The shift from Act I to Act II—played here without an intermission—is magically disorienting. Yet, for the most part the larger sense of ambiguity disappears here, in favor of specific, detailed choices. The swoon-worthy luxury of the design (scenery by Miriam Bluether, costumes by Ann Roth) would suit a Noël Coward play.

The acting is, if anything, even more specific. One real oddity of this production is the casting of three such different actresses, not only dissimilar in their physical presences, but also summoning very disparate worlds. Though Jackson tones down her accent, her precision and physicality evoke British training and style. Metcalf, on the other hand, suggests a blue-collar Midwestern milieu. Pill’s delivery has hints of contemporary hipster irony.

Did Mantello choose them deliberately for their differences, to reinforce the idea that the unified character—by all accounts based on Albee’s mother, from whom he was mostly estranged—contains multitudes? Was it simply a matter of choosing the three best actors he could and letting each go her own way? Or does he feel it’s not important that they seem to share some fundamental traits?

I think there’s justification for any of these, but it didn’t entirely work for me. In a way that I’d not felt reading Three Tall Women, I was struck by what seems to me a significant problem in the play. Without giving away too much, I can say that the character of A remains consistent in both acts—but B and C take on rather different identities, which suddenly seems not to make much sense. Who is this woman (B), who in one context is a part of A, but in another is sharply defined as healthcare worker? Or if C is an aspect of A and B, why is she also a lawyer or some functionary who deals with A’s estate planning?

Perhaps I’m being too literal, but my point is that a more nonrealistic staging would make the fluidity easier to accept. By turning Three Tall Women into a wildly entertaining, drawing-room style comedic drama—and, of course, a tour de force for Glenda Jackson—Mantello also exposes the flaws of Albee’s play.