REVIEW: In A Steady Rain, Crime Stories at Arm’s Length 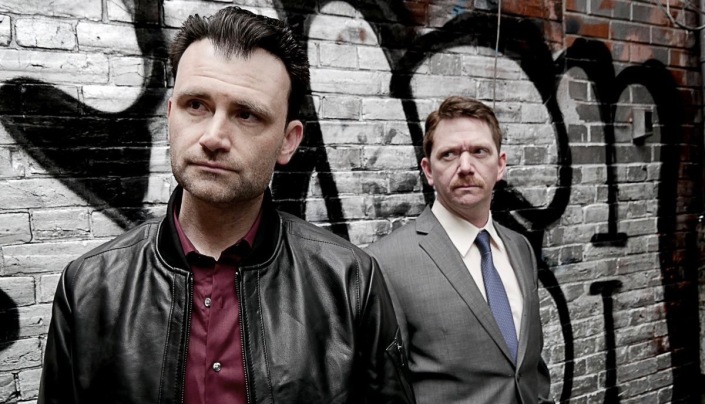 Two actors, two chairs, and some harrowing stories. The ingredients are spare, but so is a lot of powerful theater. The long, narrow tennis court-style staging in Fran Prisco’s production promises visceral thrills, as the audience is only a few feet from the playing space. And indeed, Keith Huff’s episodic A Steady Rain has some moments that spring to life. More often, though, the audience is watching from the sidelines, and the action feels out of reach.

Joey and Denny, friends since childhood, are now Chicago cops in early middle-age. Their career trajectories have been checkered, and their lives to this point also different. Denny (Marc D. Donovan) is married with a family. His ancestry is Italian, and he has a short-fuse. Joey (Keith J. Conallen) is Irish-American and single; he is the more restrained, thoughtful one. The playwright makes it all too easy to distill his characters in a few phrases, though of course there will be reversals and surprises. (The trouble with this kind of by-the-numbers writing, though, is that we expect surprises.)

Separately and in tandem, Joey and Denny describe their lives and their work adventures. Some of the stories are gripping, though there’s little here that feels truly original. A Steady Rain, if not ripped from the headlines, is at least ripped from several seasons of Law & Order. Initially, though, the tone wasn’t clear. There’s some drily comedic writing (riffs on race—Denny in particular could use several semesters of sensitivity training), the actors employ twangy Chicago accents, and at first I was put in mind of early David Mamet, especially the long monologues in Sexual Perversity in Chicago.  Not long into it, though, its darker, more serious side emerges. Many of the stories are horrific.

The big problem, though, is that they’re stories. Most of A Steady Rain is narration, with Joey and Denny telling us what happened—describing rather than experiencing. Imagine a police procedural teleplay read to you by two actors and you’ll have some idea. Conallen and Donovan throw themselves into it, but neither can overcome the arm’s-length nature of the script. Ultimately, the show, meant to be breathlessly taut, feels overlong at 90 minutes. I started to feel restless at around the one-hour mark—not coincidentally, the point where if this were a Law & Order episode, it would have been over.

A Steady Rain plays through March 25 at the Walnut Street Theatre Independence Studio on 3. For more information, visit the website.