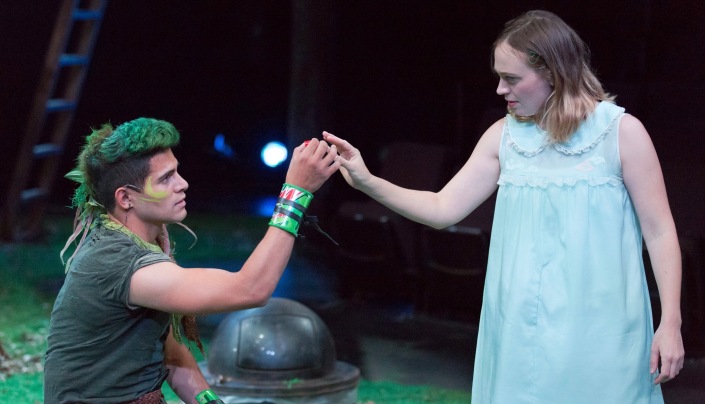 Peter Pan is one of the classic books of childhood, its greatness firmly established. You don’t need me to tell you that. But the older I get, the less sure I am that I understand it. Aspects that felt straightforward when I was a kid now seem mired in ambiguity. One day, I see it as an ode to the spirit of adventure; the next, I read it as a profound study in fear and loss. Sometimes I think the focus is family and building a home… or is it running away? Is it about being young, or getting old?  Author J. M. Barrie is slyly evasive on Peter’s exact age, though presumably he’s meant to be presexual. Yet Peter Pan the book is likely to evoke in thoughtful adult readers some disquieting speculations about sexuality.

By now, you probably think I’m off on a tangent. Well, yes and no. Peter Pan is presented at the Arden as a holiday-time family show. The emphasis, as it should be, is on the beguiling nature of the story. There is little here to scare anyone—not even Captain Hook, who, as embodied by the commanding, witty, fabulously androgynous Catharine K. Slusar, will likely charm rather than frighten even the youngest audience members. The day I saw it, a near-capacity crowd oohed and aahed in all the right places, and chuckled with delight over some dazzlingly inventive staging. 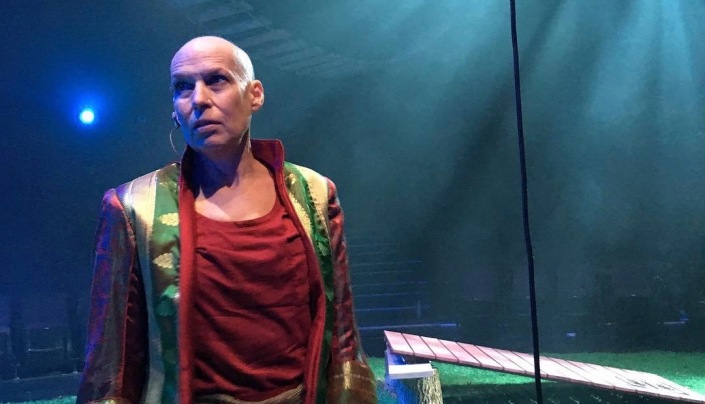 At the same time, this adaptation by writer Douglas Irvine and director Whit MacLaughlin, while retaining much that is familiar from Barrie’s original and other well-known versions of Peter Pan, introduces some very sophisticated, very adult, sometimes rather strange ideas. Peter is played here by Jo Vito Ramirez, a hunky 20-something actor—with confident swagger and a crooked smile, this Peter seems anything but presexual.  Wendy, too, seems much older in Emilie Krause’s performance, which even in her memories of childhood suggests a disaffected housewife. The world here is far from Victorian England—rather, it’s very much heartland America. A rugged campground setting and a small trailer in the background evoke a sense of drifting on the margins.

Some of this is fascinating and thought-provoking, though I don’t think the vision wholly coheres. I’d love to see MacLaughlin do a Peter Pan that is truly meant for adult audiences. As seen at the Arden in a kid-friendly setting, I kept feeling that the darker ideas were bumping heads with the more naïve, upbeat tone at the center.

Still, it’s the rare children’s show that can enchant the young, while it gives us oldsters something to think about. Maybe they should call it Peter Pans: each of us is likely to take away something specific, even unique.