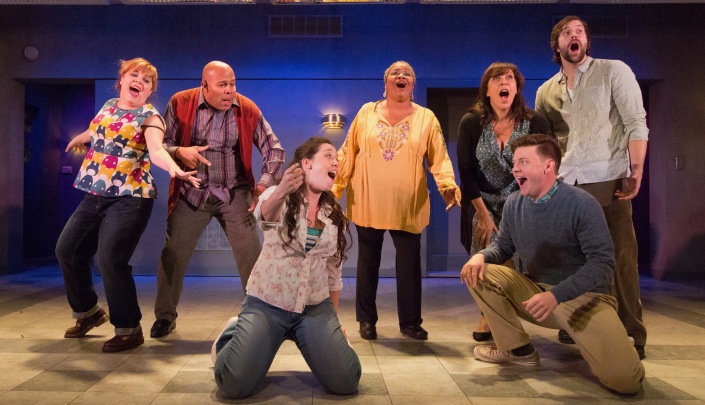 The ensemble in TouchTones at the Arden Theatre Company. (Photo by Mark Garvin)

Sometime between the Garden of Eden and Tinder, Grindr, and Ashley Madison, there was good old-fashioned phone sex. A few of us dinosaurs remember fondly that strangely arousing mix of anonymity and intimacy—the very lack of visuals made space for powerful fantasies.

Provocative ideas here, which could be developed in many directions. Instead, TouchTones skates over them with sitcom glibness, avoiding any sense underlying weight. I admire Alex Keiper (Christine) for finding some emotional core not obviously present in the material. (Alas, her voice, lovely at lower volume, turns harsh in its upper reaches.) By contrast, Michael Doherty (Justin) merely dispenses insufferable, smirky comic shtick. The rest of the ensemble do what they can with underwritten roles; Jess Conda and Joilet Harris are particularly winning.

A few minutes into Act II, there is an honest moment. Justin, delivering a chastity-promoting pep talk, momentarily falters, ultimately admitting that “it’s hard.” Doherty drops his grimacing—he looks lost and touchingly vulnerable. But this breakthrough disappears seconds later, and TouchTones resumes its perky style. Given the slick nature of the show, its few attempts to tackle more serious ideas feel forced and tone-deaf.

I’ve said little about the music and lyrics, because frankly there’s not much to say. The score is competent but unmemorable, each number slipping by and instantly forgotten.  For a topic so personal and individual, the writing is dispiritingly generic.

Midway through TouchTones, I thought that if all the specs for this show had been fed into a computer with the request to produce a PG-13-rated musical, this would be the result. Playwright Michael Hollinger and composer Robert Maggio are gifted artists who have done much good work over the years. This time, though, it’s sorry, wrong number.