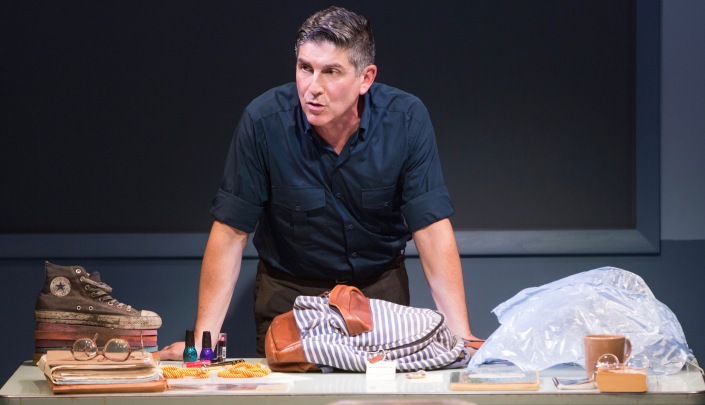 James Lecesne in The Absolute Brightness of Leonard Pelkey at the Philadelphia Theatre Company.

There’s nothing small about James Lecesne’s, The Absolute Brightness of Leonard Pelkey (including the somewhat unwieldy title, hereafter shortened to Brightness), but its wonderfulness comes, frankly, with surprise and relief.

Sara Garonzik’s final season as Executive Producing Artistic Director of the Philadelphia Theatre Company—after an extraordinary run of 35 years—had been set to end with a new play about Thomas Eakins that she helped to develop. The late-hour reshuffling that brought this substitution worried me. It sounded like the knell of financial gloom… and a one-actor, 80-minute show where PTC functions as mostly as a presenter seemed a let-down.

But Brightness is bold, daring, and large format. The show has a big heart, and Lecesne—who is both writer and solo performer—is a big talent.

It’s an odd hybrid, for sure, this fictional story of the murder of a flamboyant young gay man in a New Jersey community. You might be expecting Brightness to be a downer, or a call to action, or both, but it’s far more complex and even lighthearted than that. Brightness is part film noir, part droll comedy, and entirely engrossing. Lecesne is a fine writer and a virtuoso performer, almost miraculously adroit playing multiple characters, including some of the best cross-gender acting I’ve ever seen. The show’s LGBT theme is important and resonant, and it’s suitable for adults and teenagers. With Brightness, Philadelphia Theatre Company closes out the season on a high note.

Knowing that this would be my last visit of the season to PTC—and that an era was ending, to be followed by new management and new strategies—I made a point to get to the theater early, and I spent time looking at the production photos and framed programs on the wall. What a history is showcased there! It’s a very nostalgic one for me, certainly. When I came to Philadelphia in 1990, PTC’s productions of The Cocktail Hour and Speed the Plough were among the first shows I saw in my new city, and I remember being delighted and impressed. Over the next 27 years—sometimes as a critic, and sometimes as a civilian—I’ve liked some shows more than others (that’s true of every theater company). But as I stood there, my overwhelming feeling was gratitude to Sara and company.

A theater should never be a shrine—it’s a living, breathing place. There was something too small about Brightness at the matinee I saw, and that was the audience. A show this good should have no empty seats, and the Philadelphia Theatre Company deserves our support as they move into the next chapter. I’ll be there; I hope you will, too.