THEATER REVIEW: Too Many Cooks in EgoPo’s Delirium 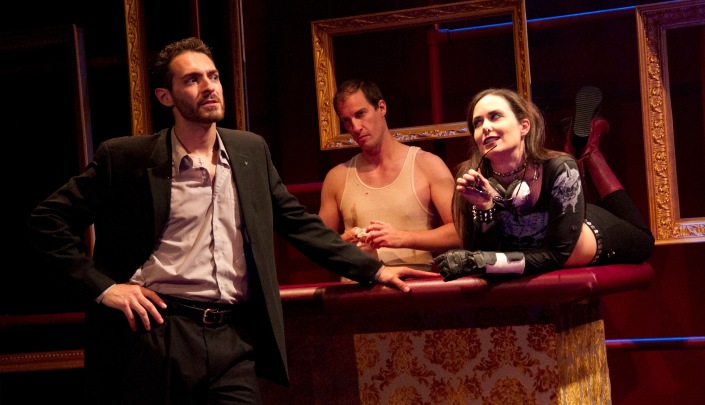 To open their Russian Masters Festival season, EgoPo is mounting an adaption by Irish playwright Enda Walsh of Dostoyevsky’s The Brothers Karamazov.  Full disclosure: I speak neither Russian nor Gaelic. But I do pretty well with Yiddish, and the word that comes to mind here is “Ungapatchka” — ornate, overdone, excessive.  In basic English, there are too many cooks in this kitchen.

The problem isn’t the source material, certainly.  One of the supreme works of literature, Karamazov’s plot — three brothers of very different temperaments living in the grim shadow of a family legacy that includes murder — is heavily philosophical, but also sufficiently gripping and suspenseful to work on the stage.  Enda Walsh, a wonderful but sometimes capricious writer, has preserved the narrative more faithfully than I expected. This contemporary reboot, full of rough language, is not a traditional adaptation, though potentially, it’s an intriguing one.

But at EgoPo, the creative rethinking doesn’t end there.  This production comes to us through still more interpretive interventions — a multi-stage process where actors further explored the play.  Seen here, directed by Brenna Geffers, the over-devised production sinks under its own weight.

It’s a shame, because there are some good things. Geffers has a vivid theatrical imagination and visual panache, which enlivened last year’s Machinal; both are on display here, too. The cast commit themselves fully — EgoPo veteran Ross Beschler is especially fine.  Parts of Delirium find the ensemble exploring and deconstructing the very notion storytelling through a variety of modes including direct address, tape-recorded insertions, lip-synching, wordless commentary from the ensemble, and more.  But it’s all too much. (Did I mention the puppets? That some of the cast have Russian accents while others don’t?)

The Brothers Karamazov explores huge existential questions of moral responsibility, desire, guilt and more.  But at the end of Delirium, I was focused on a simpler question — how can a two-hour play seem so much longer than an 800-page novel?