THEATER REVIEW: In If/Then – Beginnings, Endings, and Everything in Between 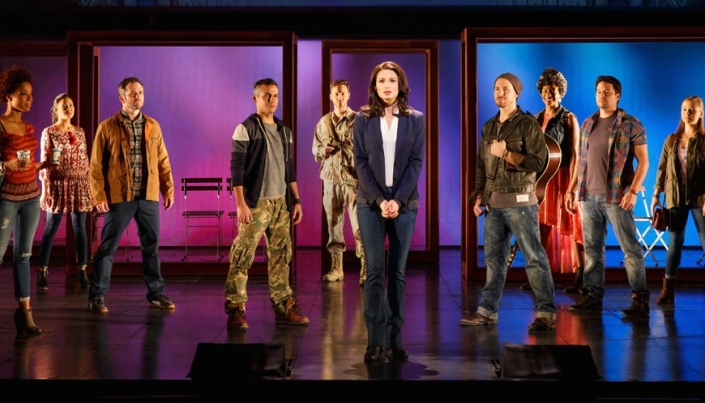 Jackie Burns and the cast of If/Then, now playing at the Academy of Music.

Here’s How It Starts: In Tom Kitt and Brian Yorkey’s If/Then, now playing at the Academy of Music, the heroine — Elizabeth, recently divorced and at a personal crossroads — imagines her life on two different paths. In one, she’s Beth, a city planner rising in the ranks. In the other, she’s Liz (Liz-beth – get it?), who puts her career on hold in pursuit of romance with Josh, a doctor currently serving in the army.

If only even one of these roads led to a better show.

If/Then is about possibilities and choices — and friendship and romance. And how we must grow up. Also urban renewal. But if this sounds bold and ambitious, coming on the heels of Next to Normal, Kitt and Yorkey’s Pulitzer Prize-winning musical about mental illness, it’s a disappointing step backward.

There’s a sense of forced “inclusiveness” in the cast of characters — both of Elizabeth’s best friends, Kate and Lucas, are gay, and Kate is also black. Equally transparent is that the show was originally created for Idina Menzel, whose exciting but relentlessly driven singing style establishes the predominant musical mode, though she’s not appearing here at the Academy.

In any case, there’s far too much happening — on Mark Wendland’s projection-filled scenery, even the New York skyline can’t stand still for a minute. If a musical can have ADHD, If/Then does. Kitt and Yorkey want to explore some serious, even heart-breaking themes, but we can barely keep track of the plot, much less invest in the characters.

For many, the saving grace will be the cast. I particularly liked Anthony Rapp, here repeating his Broadway role of Lucas in an appealingly centered, laid-back performance that is a welcome relief from all the freneticism. Tamyra Gray (Kate) and Matthew Hydzik (Josh) are also fine. As Liz-Beth, Jackie Burns is accomplished without putting any particularly individual spin on the role(s). I imagine she was cast in part because she looks and sounds like Menzel, including often over-singing and pushing for maximum volume. When she holds back, she has a lovely voice.

And Here’s How It Ends: Is there a moral to If/Then? Yes, I think there is, and I can reveal it without spoiling the show. No matter what you choose or which path you take — you’re going to sing about it. Very, very loudly.