OPERA REVIEW: Capriccio is a Triumph

Capriccio by Curtis Opera Theatre and Opera Philadelphia, at the Perelman Theater. (Photo by Cory Weaver)

In the middle of World War II, Richard Strauss premiered his final opera, Capriccio — an elegant “conversation piece,” set in a grand salon outside Paris, where an aristocratic brother and sister debate with their guests whether music or poetry matters more.

If this sounds unforgivably frivolous — trust me: it’s not. Capriccio is funny, beautiful, and profoundly moving. But it is difficult to get it right. So let’s cheer the co-production by Curtis Opera Theatre and Opera Philadelphia. Superbly done, both musically and theatrically — and presented in the ideally intimate Perelman Theatre — it’s a major achievement.

Though nominally a comedy, Capriccio is also serious, and suffused with Strauss’s signature autumnal glow. Throughout the opera are nostalgic references to his earlier works: a mirror evokes Der Rosenkavalier, jokes on the difficulty of making theater recall the backstage world of Ariadne auf Naxos, and so on.

More significantly, the opera’s theme has deep personal resonance for Strauss. Thirteen years before Capriccio, the composer catastrophically lost his librettist, the great Hugo von Hofmannsthal, who died suddenly of a stroke, while working on what would be their final opera together. Few artists better understood how important — and unanswerable — the words-or-music question is.

Capriccio, with a libretto by conductor Clemens Krauss, is probably the last major German Romantic opera. Yet it’s also innovative, with its odd meta-theatrical performance sequences and marvelous chamber sextet in lieu of an overture. That sextet — and the final scene for Countess Madeleine, the principal soprano role, as well as the glorious “moonlight music” that precedes it — are frequently performed separately.

Director Chas Rader-Shieber and the design team tackle the wartime aspect head-on, with piles of rubble surrounding the immaculately white drawing room set. The period here is transposed to something amorphously modern — but touches of the 18th Century remain, giving a timelessly European flavor. In their pale costumes, the inhabitants seem almost ghostlike. Yet they’re a likeable bunch – dilettantish, but sincere. In Rader-Shieber’s hands, the comedy remains delicate. 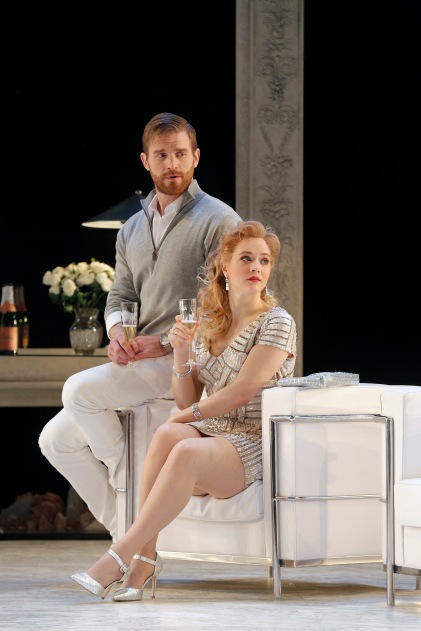 Capriccio’s magical orchestration should be similarly diaphonous, and Timothy Myers and the orchestra largely achieve this, though some of the grander passages — especially in the horns — really cry out for the Vienna Philharmonic.

The cast includes a guest artist — Jarret Ott, a Curtis graduate who recently scored a great success here in Cold Mountain. Unsurprisingly, Ott is the most consistently polished performer here, singing with honeyed beauty and filling every dramatic moment. But the opera belongs to the Countess, and Kirsten MacKinnon is a major discovery — her lovely lyric soprano, touched with the silvery, springlike quality Strauss loved, projects easily, and her elegant sense of line and lovely stage presence suit the patrician Countess.

The rest of the cast is also strong. Especially good are the Flamand (ardently full-voice tenor Evan LeRoy Johnson), bass-baritone Tyler Zimmerman as a funny, blustery LaRoche, and mezzo Lauren Eberwein, who made an uncommonly glamorous Clairon. (The latter two roles are really meant for canny veteran singers — that the Curtis cast could deliver them so effectively is a testament to the enterprise.)

Last year, Curtis, Opera Philadelphia, and Rader-Shieber offered another exceptional collaboration – Strauss’s Ariadne auf Naxos. Is it too much to hope for that they’ll do more? I can imagine a yearly mini-Strauss Festival — what a treat that would be!

There is limited seating for the remaining two performances of Capriccio — but make the effort: you’ll be amply rewarded.

Capriccio has performances on March 4 and 6. For more information, visit Opera Philadelphia’s website.