Marlis Petersen as Lulu at the Metropolitan Opera

In December 1980, the Met’s telecast of its first production of Berg’s Lulu went ahead, despite a last-minute crisis – the cancellation of star Teresa Stratas in the title role. I watched the show at home on a small television set, and any disappointment I felt lifted quickly – Julia Migenes, who took over as Lulu, was mesmerizing, and while I’m not sure I really understood the opera, I knew it was something important. I’ve revisited that telecast since – it confirmed my positive feelings about Migenes, and about the production, too – though it’s rather staid by today’s standards (and of course, the telecast itself was quite primitive).

Fast-forward almost 35 years to the Met’s second video transmission, and what a difference! This time, I was in a theatre; the telecast technology was astoundingly sophisticated; and the new production – by artist William Kentridge – was anything but staid. And there were no last-minute substitutions, although in October, conductor James Levine had stepped aside – his replacement, Lothar Koenigs, was more than competent, but not quite magical.

On balance, the Met’s new Lulu is a triumph – a coup especially for Kentridge; also for General Manager Peter Gelb, whose track record with directors and designers is mixed. It will go a long way to validate Gelb’s support of multi-media productions – from my limited perspective, it’s the best use yet at the Met of this kind of technology.

Kentridge’s production is rooted in collage – bold, India ink drawings that appropriately recall Egon Schiele and Georg Grosz, are filmed and projected in complex, animated arrangements. They appear not only as backgrounds, but also sometimes washing over the physical action. Several knowledgeable friends who have seen this Lulu in the theatre complained that it’s over-busy – but I didn’t find it so in the telecast, which has the advantage of close-ups. Mostly I was riveted. 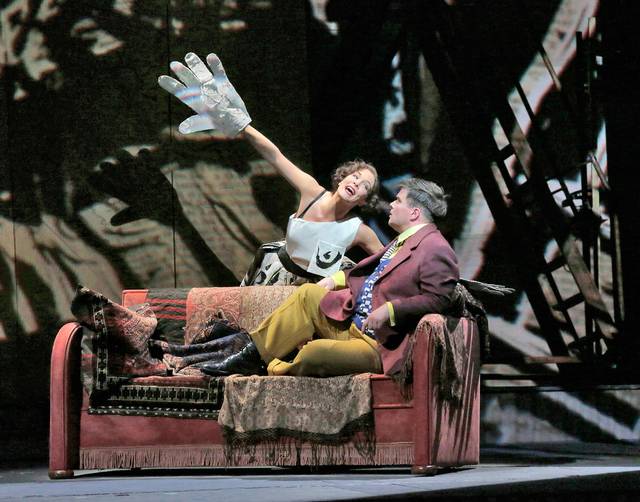 Marlis Petersen and Daniel Brenna in Lulu at the Metropolitan Opera. (Photo by Ken Howard)

What Kentridge and company capture so well is a pivotal underlying theme of Lulu – that the bewitching heroine is herself an assemblage – the sum of what her male lovers perceive and want her to be, along with a significant amount of self-invention.

This is a good fit for Marlis Petersen’s Lulu. The German soprano was sensational – theatrically, musically and vocally embodying the role with almost insolent ease. (I can’t swear to this, but I’ll bet Petersen sings more of the notes – including some stratospheric coloratura stuff – than any other soprano at the Met has attempted.) Lulu is a role that can be played effectively in any number of ways. We might identify a continuum: innocently childlike at one end, calculatedly seductive at the other. To me, Petersen suggested something in the middle – a pragmatist, cleverly adapting to changing circumstances. The harsh glare of HD videography – not always flattering to opera singers – revealed Petersen as an always engaged, resourceful actress, subtly nuanced even in the tightest close-ups.  (Close-ups also inevitably showed Petersen, great looking for any age, is rather older than Lulu is meant to be – but this also turned out to be an advantage – it’s appropriate for the character to be a bit older and harder than she initially appears.)

Petersen is certainly the star here, but the rest of the cast is also exceptionally strong as both singers and actors. They include Met veterans – Susan Graham, Paul Groves, James Courtney, Jane Shaulis, and Franz Grundheber – as well as some newcomers. Johan Reuter is an unusually sexy, dangerous Dr. Schön. Daniel Brenna, though less than dulcet vocally, is an appealing Alwa. Elizabeth DeShong is excellent in several small roles. But (after Petersen), the most extraordinary performance is baritone Martin Winkler as the Acrobat – Winkler’s physicality and facial mobility would make him a great non-singing actor – I can imagine him in Brecht “everyman” roles, or doing the kind of creepy parts that once upon a time were specialty of Peter Lorre.

I expect that Kentridge’s Lulu will be benchmark for the Met – and will set a new standard for many fans of the opera. I was thrilled by it – yet at the same time, I feel there’s a strong argument in favor of a simpler, more realistic production. Expressionism and alienation are so hard-wired into Berg’s score – and Wedekind’s Lulu plays, which are its source – that in a sense, underscoring those elements visually is overkill. Put it another way – the opera seems even more shocking when it is situated in a world of bourgeois respectability. (I felt similarly about Sam Mendes’s Cabaret production, preferring the restraint of Harold Prince’s original.)

Luckily for us, we don’t have to choose. Lulu is here to stay, and she and her opera will continue to perplex and haunt us. For now, if you’re able to see the Met production – on film or in the theatre – you absolutely should.