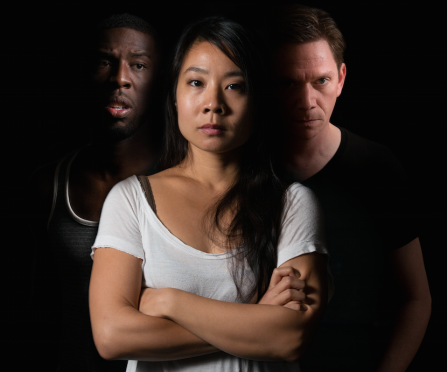 Lights Rise on Grace by Chad Beckim arrives at Azuka as part of the National New Play Network’s ambitious Rolling World Premiere initiative, in which several theatres produce a work in succession. The idea is that each production is an opportunity to continue the development process. In this case, Azuka is the third stop – previously it was done at Woolly Mammoth in Washington, D. C., and at Stageworks in Florida.

It’s easy to see the value for Beckim and all the artists involved. As for what audiences are getting – that’s a different question.

I understand the appeal of Lights Up on Grace, which hits many benchmarks regional theatres are looking for – it’s just under 90 minutes, has a small cast (three actors, each playing one principal character and assorted others), and is notable for racial diversity. Grace, a teenage schoolgirl, is Chinese; her boyfriend, Large, is black; Riece, who is Large’s prison buddy, is white. 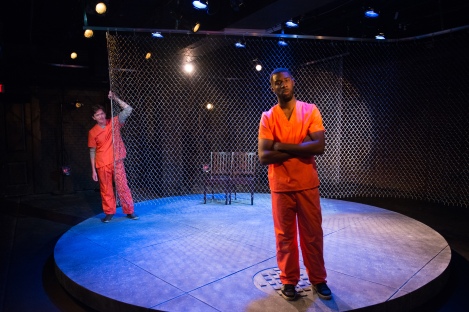 This description requires context. Light Up on Grace covers a number of years in the interlocking lives of its three main characters. It’s probably best to discover the details on your own – I’ll add only that the story is emotionally fraught and full of grit. Beckim’s style is punchy and deliberately fragmented.

There’s some pleasure to the virtuosic riffing and short, energetic scenelets. But it wears thin quickly, and there’s not enough development of characters and relationships to make us care. Similarly, director Kevin Glaccum’s production is polished and visually accomplished (fine light and scenic design by J. Dominic Chacon and Colin McIlvane), but I sometimes wished for something simpler and more straightforward. Among the three talented actors – Bi Jean Ngo as Grace, Ashton Carter as Large, and Keith J. Conallen as Riece – only Conallen was free of unwelcome artifice.

Beckim’s seriousness is not in doubt – he wants Lights Rise on Grace to be a deep examination of three linked lives, as well as a study of their circumstances. But the shorthand style robs the story of nuance, and the quick interjections by supporting characters – delineated by mostly by accents – feel perilously close to racial stereotypes.