At Irish Heritage Theatre, Juno and the Paycock seems to begin even before the actors come onstage. There’s mournful fiddle music playing as we arrive – and the genteel shabbiness of Plays and Players theatre could be an extension of Juno and Jack Boyle’s Dublin tenement house. Audiences might almost believe they’re at the center of the action.

They aren’t, of course. Sean O’Casey’s play, a modern classic, is set in 1922, amidst the turbulence of the Irish Civil War. Danger lurks quite literally outside the Boyle’s front door – in fact, their lives have already been irrevocably altered by it. Son Johnny, having taken a bullet in the hip and lost an arm, is a walking poster image of its crippling violence.

Even more poignant is the daunting effect the war has on his spirit. Johnny is prone to melancholia and hysterical visions (today he would probably be diagnosed with PTSD). And in a metaphoric sense, Johnny is Ireland – it’s no coincidence that this shattered young man embodies the play’s most radicalized sense of national character. 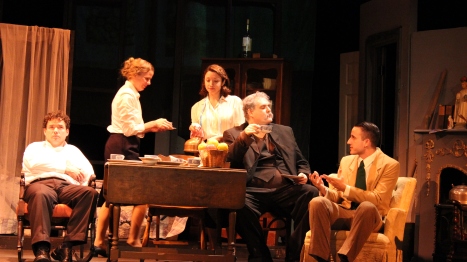 The beauty of Juno is that it’s simultaneously specific to its moment (the Irish songs that command the stage in Act II are a kind of memory capsule), yet timeless in its depiction of the strained bonds of family. During Act II, I rather unexpectedly thought of Lorraine Hansberry’s A Raisin in the Sun. The two plays are very different – Hansberry is writing 35 years later about a black family in Chicago – but they share some central themes, including the limit to which a financial inheritance can solve family problems; and how, in seemingly male-dominated households, it’s often the women who are the only truly functional characters.

Director Peggy Meacham’s production of Juno is itself a kind of mirror of the Boyle family situation. Resources are modest. But where it counts, the all-important virtues – sincerity, charm, emotional engagement – are here in abundance.

Ethan Lipkin and Kirsten Quinn offer fine performances as Jack and Juno. They seem oddly paired – he’s large and boisterous, with a vaudevillian’s comic flair, while she’s petite, pretty, and no-nonsense. But there’s a lovely connection between them – and more critically, both actors have unexpected reserves of power for the harrowing final act.

There’s good work here also among the supporting cast, including Kevin Rodden as an appealingly vulnerable Johnny, and a delicious comic turn by John Cannon as Joxer, Jack’s partner in mischief. Occasionally, the compressed playing space and the large scale of the play make for some awkward staging – more often, though, we’re grateful for the intimacy.

It is indeed the smallness of the story that ultimately registers so deeply – in the play and this production. In 1949, Arthur Miller would write a manifesto about Tragedy and the Common Man, but O’Casey understood it nearly three decades before – in the littlest lives, there is heroic suffering.