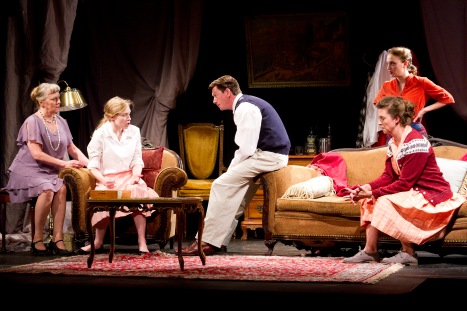 Dramatist or melodramatist? The jury is still out on Lillian Hellman, whose play, The Children’s Hour, is onstage now at EgoPo, directed with bold imagination by Adrienne Mackey. I’m not sure this production answers the question, but it gives us an opportunity to judge for ourselves.

Hellman has always been controversial. Her greatest fame came as a memoirist, though that, too, is contested: it is widely believed that she made up a significant part of Pentimento – particularly its account of Julia, an anti-Nazi crusader and, supposedly, Hellman’s good friend.

In terms of her theater work, Hellman remains one of America’s best-known female playwrights, though she died in 1984, and had her last new work on Broadway – a failure called My Mother, My Father and Me – more than 20 years before.

But how good are her plays? Personally, I can’t decide. The best of them – The Children’s Hour, also The Little Foxes – pack an undeniable wallop, with well-crafted plots and cleverly structured exposition. But characters and larger themes sometimes feel simultaneously underdeveloped and heavy-handed.

I’ve taught Children’s Hour in a seminar on sexuality in drama – it is, famously, a play about lesbianism, written in 1934 when the mere mention of such things was largely taboo. (In brief: the story involves two female schoolteachers, Karen Wright and Martha Dobie, who are accused by a disgruntled student of being lovers.)

Children’s Hour has the problems you’d expect in a work of its era – creaky dramaturgy, and an unchecked sense of class prejudice (the setting is a bucolic, upscale New England town – how could such things happen here??). Ostensibly, it’s more about the damaging power of gossip than it is about sexual attachments – but that’s where things get interesting.

So I looked forward to seeing what director Adrienne Mackey would make of Children’s Hour.

She starts by giving the contained story some room to breathe. The tennis-court style staging, with audience on both sides of a long stage space, opens up the action. There is a charming looseness to the overlapping student conversation that feels natural, as does the casual interplay between Martha and Karen.

Conversely, Mackey also give the play breathing room in the final act by slowing down the pace, and emphasizing awkward gaps in the conversation. Much of this production’s power is in that scene. The three actors – Jenna Horton as Karen, Emilie Krause as Martha, and Keith Conallen – do heartbreakingly simple, connected work, and the contrivance in Hellman’s script falls away, revealing something deep and devastating. (The excellent Cheryl Williams is also very moving here.)

But Mackey leaves her strongest mark in the portrayal of the students. Hellman specifies their ages as 12 to 14, and a few do indeed look like children. But several are clearly young women, not merely on the brink of sexuality, but well into it.

This is especially true of Mary, the instigator, who is played here by Maggie Johnson in an extraordinary performance. At moments, Johnson looks childlike – more often, though, her pulsating, neurotic energy and pale as moonlight beauty suggest something completely different – a film noir femme fatale, perhaps. (Imagine finding Gloria Grahame in a boarding school.) 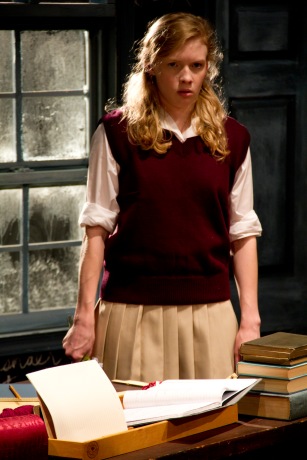 Maggie Johnson in The Children’s Hour. (Photo by Dan Sarrafian)

Effectively, this Mary changes everything, forcing the audience to rethink a central preconception about The Children’s Hour – what if the triangle here isn’t Karen/Martha/Joe… but rather Karen/Martha/Mary?

Not all of Mackey’s production is as revelatory as this, and occasionally the clunkiness of Hellman’s writing proves unfixable. But the best of this Children’s Hour is very good indeed – and even if you think you know the play, you’ll find there’s more here than you imagined.