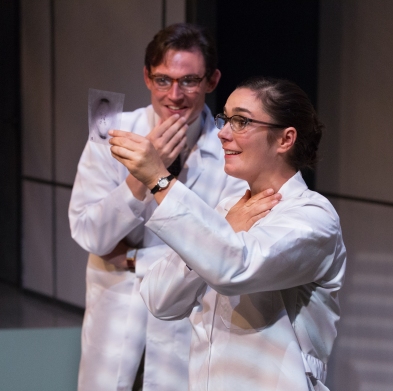 In science and theater, timing matters. British DNA researcher Dr. Rosalind Franklin’s early death – at 37, from ovarian cancer – is one reason she is largely unheralded, while several of her male colleagues won the Nobel Prize. Photograph 51, Anna Zeigler’s play about Franklin, had an honorable if unspectacular debut in 2010 – but just this week, it opened in London with a certain A-list film diva (oh, OK – it’s Nicole Kidman), putting the play and Franklin back in the headlines.

This is indeed good timing for Lantern’s version, which will likely benefit from the attention. There’s no movie star here playing Franklin – but we have the excellent Genevieve Perrier, who gives an impassioned, accomplished performance. Perrier’s exquisite appearance suggests fragility, yet she has powerful, take-no-prisoners delivery, and the combination works to great effect. She is also the one actor here who moves effortlessly from Photograph 51’s narrative passages into the conversational scenes. 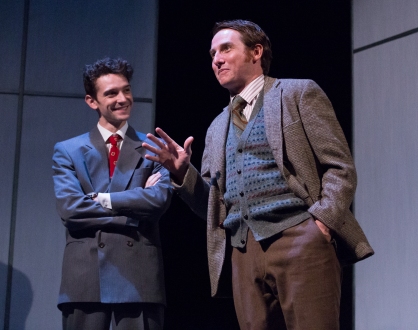 About that narration – there’s a lot of it (sadly, this has become ubiquitous playwriting shorthand for conveying plot details), and it’s spoken by the cast in confident, ringing tones. Too often, though, director Kathryn McMillan’s minimalist production doesn’t sufficiently mark the distinctions between sections of direct address, and the more intimate, connected moments. Most of the male characters, consequently, fail to register on a human scale. (In any cast, they’re by and large not a likeable lot – smart, but socially awkward and gauchely competitive.)

It is a good story, and to Ziegler’s credit, Photograph 51 makes it clear that Franklin’s relative obscurity is the result of many complicated factors – not merely that she was a woman in an Old Boys Club, though she was certainly that, too. Audiences are likely to leave feeling entertained and edified (though I’m not sure the script is all that science-heavy).

But it would be better if both the play and production seemed more like actual people talking in real life situations, and less like a series of headlines, read by an ensemble of announcers.