Steven Boyer in HAND TO GOD

In my innocent youth, puppets were loveable animal figures – Shari Lewis’s Charlie Horse, and the adorably coquettish (and carnivorously named) Lamb Chop… also, my personal favorite, Captain Kangaroo’s pal, mischievous little Bunny Rabbit. Later, as a theatre student, I discovered a more sophisticated world of puppetry, including Bunraku, and of course Julie Taymor’s fabulous constructions. But my initial reaction to the idea of puppets remained rooted in cuteness.

What must the children of today’s Broadway think? Many of them grew up on Taymor – but also on Avenue Q, the hit musical, where puppets could say provocative things that seemed all the more shocking coming from the mouths of… not babes, but socks.

Robert Askins’ imaginative new play, Hand to God, is very much post-Avenue Q, and not only because both shows turn the traditional idea of puppetry on its head. Hand to God has also had a similar commercial trajectory to Avenue Q, moving from off-Broadway, where it was rapturously reviewed and seemed very much at home, to a second life on Broadway, which is riskier. (Hand to God’s clever ad campaign is playing this up, with billboards that read, “No Movie Stars. No London Transfer. No Film Adaptations. Pray for Us.”)

Hand to God is now open on Broadway, and – though it’s still too early to talk about long-term success – the signs are positive. Ticket sales are strong, and many crucial reviews (the New York Times, especially) were very positive. There were also some naysayers, among them Rex Reed in the Observer, who described the show as “a brainless barrage of trash, heresy, stupidity and nausea.” (It might be worth pointing out that the “heretical” element is also what many of the show’s fans are so enthusiastic about.)

Recently, I saw Hand to God, and – while I don’t agree at all with Reed’s entirely negative assessment – I’m also not completely convinced that this production realizes the full potential of Askins’ often-brilliant script.

It’s a clever premise, for sure. Jason, a troubled boy in a small Texas town, bides his time in a church basement, along with several other misfit kids who are forced to channel their energies into making puppets for a religious pageant. Supervising the group is Margery, Jason’s single mom, who has troubles of her own – the church’s Pastor Greg lusts after her, while Margery, in turn, has a none-too-healthy bond with Timothy, one of the teenage outcasts.

At the heart of the show is Jason’s growing reliance on – one might even say apparent merging with – Tyrone, his puppet creation. Tyrone seems to have a life of his own, though it’s never clear whether this increasingly demonic figure is defying Jason, or channeling him. (Both Jason and Tyrone are played by Steven Boyer in a dazzling star turn that’s equal parts fierceness, comic virtuosity, and something more human and fragile.)

My mixed feelings about the show have more to do with the production than with the script, and it took a while before I realized it.

Initially, I was pretty much delighted by the first act, beguiled by its high style cartoonish-ness, so slyly used in the service of something so dark. Director Moritz von Stuelpnagel has given the show a brazenly broad look and feel – it gets things off to an exhilarating start, with the audience clearly relishing every épater le bourgeoisie moment. Beowulf Boritt’s scenery plays some spectacular tricks of its own, and the performances – not only by Boyer, but also Sarah Stiles and Michael Oberholtzer, as the other youngsters – are spot on. By the way, they are all obviously adult actors – this often-tricky conceit pays off here, since we’re meant to see them exaggeratedly poised between youth and adulthood.

But in the darker, more deliberately provocative second act, I felt the limits of that exaggeration – even as my respect for Askins’ writing was growing. I began to notice just how touching (and deeply sad, yet also very funny) some of Hand to God really is, as when Timothy reveals, rather wistfully, his vision of what lovers do – “It’s nice. They have brunch.” Moments like this want a lighter directorial touch, and a less brash playing style. They aren’t fully realized here.

Two central performances illustrate the problem. Geneva Carr (Margery) is marvelously quirky in the comic bits – but not as sympathetic is she might be in the sadder ones, nor as shockingly misguided in her sexual aggression. Marc Kudisch (Pastor Greg) even looks like a cartoon (he’s the spitting image of Family Guy’s Joe Swanson, the muscular but wheelchair-bound cop). 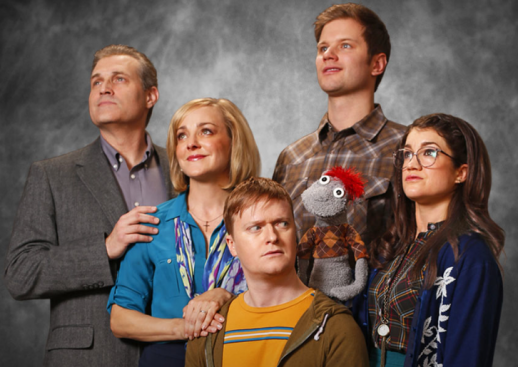 The Cast of Hand to God

Kudisch is terrific at nailing the fumbling, blindingly out-of-touch, self-centered side of the character. But I began to wonder whether a more inherently sympathetic actor – Bill Paxton, for example – would bring something more real to the role – and whether that sense of reality might ultimately make more of Askins’ play.

It’s the complicated mix of tones that makes Hand to God so striking – but also so difficult to get exactly right in production. Maybe it’s not possible for any director to find it all. I thoroughly enjoyed much of what this wildly gifted group brought to it, and I highly recommend the show to those who aren’t easily shocked.

But I also hope sometime to see a very different treatment of Hand to God – one that is fundamentally less comedic and more nuanced, and treats the material as both more serious and sadder than it feels here.

Whatever else you may feel about Hand to God and this production, it has the odd distinction of assembling the coolest collection of names I’ve ever seen – in addition to the aforementioned Moritz von Stuelpnagel and Beowulf Boritt, there’s also sound designer Jill BC Du Boff, and puppet designer Marte Johanne Ekhougen. (Sadly, Best Names is not a Tony category.)