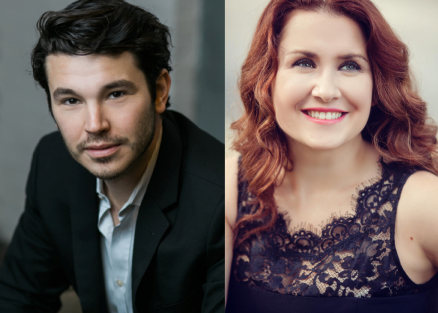 By the time I was of listening age (that is, in my early teens, around 1970), operetta performances, at least in the U. S., were rare. A handful of works could still be seen regularly – Die Fledermaus and Die Lustige Witwe, and of course Gilbert & Sullivan, though that’s a bit different. But a wonderfully rich, distinctive repertoire seemed on the brink of disappearing.

So I learned about operetta mostly from records, and, occasionally, films (Jeanette MacDonald and Nelson Eddy). I especially loved Victor Herbert – such a wonderful combination of grace, brio and humor! But many works – or, more accurately, individual songs – imprinted themselves on my brain. A favorite number is “My Hero,” from The Chocolate Soldier, once a staple for concert sopranos, which I first heard on TV, sung very memorably by Vivian Vance as Ethel Mertz!

But that was pretty much all I knew from the show (I’d never caught up with the Rise Stevens movie) – till last weekend, when delightfully and unexpectedly, I had a chance to see it, courtesy of Philadelphia’s Concert Operetta Theater. The group, under the leadership of Daniel Pantano, exists specifically to bring back these works (largely, but not exclusively, Viennese operettas).

I discovered that Oscar Straus’s The Chocolate Soldier, very loosely based on Shaw’s Arms and the Man, is a fluffy but still funny comic romance/satiric war story (here, Pantano himself adapted an adaptation). “My Hero” may be the big hit, but the score is full of lovely things, including several terrific ensembles.

What is especially impressive here is the cast – (mostly) young singers, all with fine voices, as well as a gift for the stage. While the libretto is substantially cut down, and the staging minimal, there’s still a sense of storytelling, and the singers wisely find a good balance between sincerity and a little bit of camp. (I’m not sure there’s any other way to act it.)

The leading roles of Nadina and Lieutenant Bumerli were taken by Kimberly Christie and John Viscardi, both attractive, appealing performers. She has a sense of sparkle in her tone and delivery; he is a droll actor, with an interestingly dark yet lyric baritone.

The rest of the company – Michael Ashby, David Gleichman, Ali Javaheri, Rachel Lipson, Garrett Obrycki, and Karina Sweeney – were terrific individually and together. A four-instrument, Palm Court-style ensemble provided the accompaniment, and conductor Tim Ribchester gave the whole evening an elegant sense of shape, letting the music breathe when it needed to, while providing a sense of forward momentum (and his musical direction also delivered some precise harmonies in the ensembles). A number of members of this company are affiliated with the prestigious Academy of Vocal Arts, and the group performs in their intimate (and period-appropriate) Helen Corning Warden Theater.

The production values may be small, but the charm is bountiful. I certainly intend to go back in May for Die Fledermaus – I won’t be at all surprised if this group does far better with it than the recent, listless production offered at the more glittery, but far too cavernous, Metropolitan Opera.