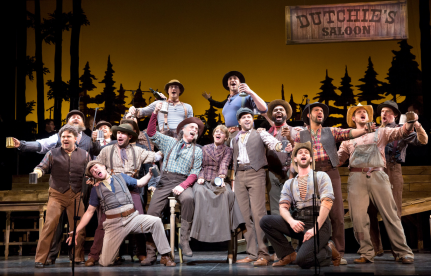 The Paint Your Wagon ensemble at Encores

By my count, Encores, now in its 22nd year, has produced 65 musicals (not counting some gala concert evenings, and a couple of special summer seasons). It’s curious that it took so long to get to Paint Your Wagon, which follows the company’s general mission – to do Broadway shows that weren’t especially successful originally, and haven’t been revived much since – but also is a very familiar title, at least to my generation, who grew up with TV variety show performances of the breakout hit, “They Call the Wind Maria.”

Turns out, I’m glad they waited. Last week, when they finally offered Paint Your Wagon, the stars (by which I mean both the cast, and something more metaphysical) were in near-perfect alignment. Encores has done fantastic work before – their Chicago revival, still playing on Broadway, is one prominent example among many – and this is close to the top.

One reason is certainly Lerner and Loewe’s luscious score, which chronologically follows Brigadoon and precedes My Fair Lady. (Lerner’s book, alas, isn’t in the same class, and probably accounts for Paint Your Wagon’s disappointing original run of 289 performances.)

But this Encore’s version had something special that’s not so easy to describe – there was an authenticity and genuineness that touched the heart. (The given circumstances of Paint Your Wagon – gold rush pioneers, living in constrained circumstances, whose dreams are likely to be unrealized – are unusually somber.)

The inspired casting of Keith Carradine in the leading role of Ben Rumson helped a lot. Over a long career that has ranged from hunky young leads to elderly character types (as here), Carradine’s acting has always impressed me for its grounded-ness. I’ve seen more virtuosic and protean actors, but none who always seem so honest. He certainly brings that quality here, playing a character who is part wise patriarch, part country comic.

Jenni Barber and Keith Carradine in Paint Your Wagon at Encores

Carradine’s vocal style is pretty far from Broadway – he’s closer to a country-western balladeer – but that makes for a pleasingly distinctive sound in Paint Your Wagon. His big numbers – the haunting “I Still See Elisa,” and the more anthemic “Wandrin’ Star”—were deeply affecting.

But in anthemic terms, nothing equals the driving force of the “They Call the Wind Maria,” sung by Steve, one of the prospectors, and chorus. It’s a showstopper for sure. The real trick is not over-play it.

Nathaniel Hackmann, a relative newcomer, pretty much knocked it out of the park. Hackmann is hunky as hell, has a voice of sable plushness, and all the charisma you could want. But what was so mesmerizing here was his restraint – standing stock still, singing with effulgent tone but never pushing, Hackmann let us know there was more where that came from.

VIDEO: “They Call the Wind Maria” sung by Nathaniel Hackmann (Paint Your Wagon)

Carradine was the evening’s marquee name, and Hackmann the biggest discovery – but the happiest surprise was Justin Guarini, playing Julio Valveras, the Mexican prospector and romantic lead.

I knew Guarini mostly as a name from the first year of American Idol, though he’s done quite a bit of musical theatre on Broadway and regionally (and, prior to American Idol, had trained at Philadelphia’s University of the Arts). But nothing prepared me for the charm of his performance. His acting was connected and simple, and he certainly nailed the Mexican accent.

Julio is also the most vocally challenging role in the show – his three exceptionally lovely songs (“I Talk to the Trees,” “Carino Mio,” and “Another Autumn”) call for tenorial color, considerable power, but also easy access to head voice, and a legato line. The role’s creator, Tony Bavaar, set an extraordinarily high standard. (What became of him after Paint Your Wagon, I wonder?)

AUDIO: “I Talk to the Trees” sung by Tony Bavaar (Paint Your Wagon)

Before the show, I’d have bet there wasn’t a chance in hell that Bavaar’s performance would be equaled. But it was. Guarini’s left behind all pop stylings, and instead offered bel canto virtues – a beautiful tone, easy top notes at all dynamics, and a precise sense of rhythm that never felt metronomic. There was also a kind of golden Latin warmth in the sound, reminiscent of some dance band-era pop tenors – Tino Rossi, Georges Guetary – who had a similar sense of easy grace.

Justin Guarini and Alexandra Socha in Paint Your Wagon at Encores

Carradine, Hackmann and Guarini were, in a sense, a trio of stars. The audience certainly greeted them that way. But to their great credit, they always behaved like ensemble players, part of a team.

For this, we should also thank director Marc Bruni, who gave Paint Your Wagon not only one of the most fully-realized productions of any Encores musical (I’ve seen all but three or four) – but also a production that trusted the material to make its point. There was no fussing or grandstanding.

I’ve gone on at length already, so I’ll keep the rest brief. As we’ve come to expect from Encores, orchestral playing (under Rob Berman’s direction) was superb. The entire ensemble rose to the occasion, with deft supporting turns by Robert Creighton, William Youmans, and others. Denis Jones’ choreography had period style and energy – the original was by Agnes De Mille, and this captured it, while still feeling wholly original.

You may have noticed, I’ve mentioned only men so far. Paint Your Wagon is heavily male-dominated, but there is one major female character – Jennifer Rumson, Ben’s daughter, a 16 year-old girl on the brink of womanhood. The adult actress, Alexandra Socha, played her here, and though she sang, danced and acted with considerable polish, initially I found her too sophisticated.

But it’s a really tough role – Jennifer must first seem a tomboy, who nonetheless is the object of lust for virtually every man in town. (This is one icky aspect of a book that also ill-advisedly explores the cute side of polygamy, and wives for sale). Later, she goes off to school, and returns a young woman of social poise, ready for romance with Julio. Ultimately, Socha navigated all this about as well as possible.

In all, I think that Encores made about the best possible case for Paint Your Wagon. I’m convinced it wouldn’t be possible to resurrect it for a long run, which makes this version all the more valuable.

For years, I’ve wondered why Encores hasn’t had a televised event, via Great Performances or something similar. I really wished for it this time, but I’m happy to report that Paint Your Wagon will get a cast recording – so those of you who couldn’t attend will be able to hear what the shouting was about!